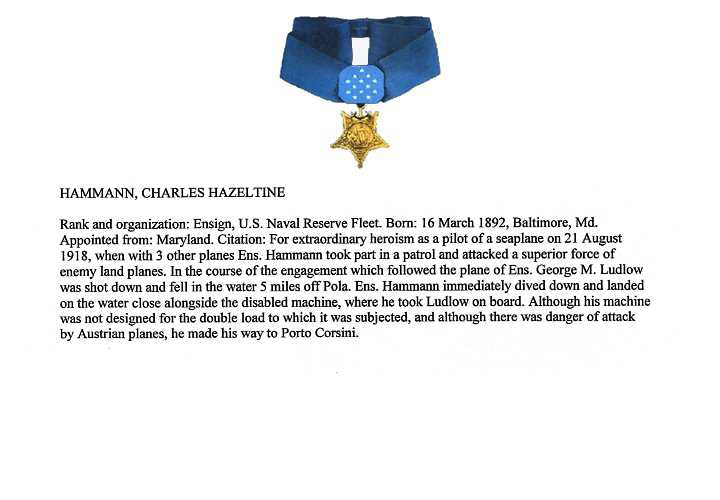 Ensign Hammann was the first naval aviator to earn the Medal of Honor. Assigned to the newly established naval air station at Porto Corsini, Italy, Hammann had been trained first in Franch and then in Italy. Porto Corsini was strategically located some 65 miles west of the Austrian naval base at Pola (what is now Croatia). Although Porto Corsini was an American naval air station, the Italians provided all equipment except food and clothing, including the aircraft the American pilots flew.

The American squadron's first mission, shceduled for August 21, 1918, was to drop propaganda leaflets over Pola. This mission was dangerous, because Pola was heavily defended and, more importantly, in an effort to curtail such activities, the Austrians had declared that anyone caught dropping leaflets would be executed as a spy.

Undeterred, a flight of five Macchi M-5 fighters and two M-8 bombers, under the command of Ensign George Ludlow, set out for Pola on the morning of August 21. Shortly after takeoff, one bomber and one fighter had to turn back because of engine trouble. Arriving over Pola at 11:20 a.m., the remaining bomber quickly dropped its leaflets and the Americans headed back for Porto Corsini.

The Austrians responded with anti-aircraft fire and launched seven airplanes (five Albatross fighters and two seaplanes.) Although the Austrian seaplanes were soon left behind, the fighters quickly closed the Americans. American fighter aircraft turned back to engage the Austrians, but two of the M-5s dropped out of the fight very quickly after their machine guns jammed. Along with the lone bomber, they were able to make their escape.

Hammann and the other pilot, Ensign Ludlow, were left to engage the Austrian fighters. Hammann took on two Austrian aircraft while Ludlow engaged the other three. Ludlow got the worst of the engagement. He took several hits and was forced to land in the water about five miles from the harbor entrance. Hammann quickly decided to rescue his squadron mate. This was an extremely hazardous decision because the Austrian planes were still in the vicinity, the winds were heavy, the seas choppy, and Hammann's plane was damaged as well. There was the threat they would be executed as spies if the rescue attempt failed and they were both captured. Nevertheless, Hammann landed and picked Ludlow up. Since the M-5 was a single-seat fighter, there was no place for Ludlow, so he climbed behind Hammann and sat under the motor holding the struts. Take-off was also problematic since the M-5 was not built to carry the weight of two men. Somehow Hammann got the plane back into the air and headed home. Inexplicably, the Austrian aircraft did not attack Hammann while he was on the surface or during the flight home. Although Hammann made a good landing at Porto Corsini, the plane was swamped by the additional weight and flipped over. Neither pilot was badly injured and both were fit for duty within a few days.