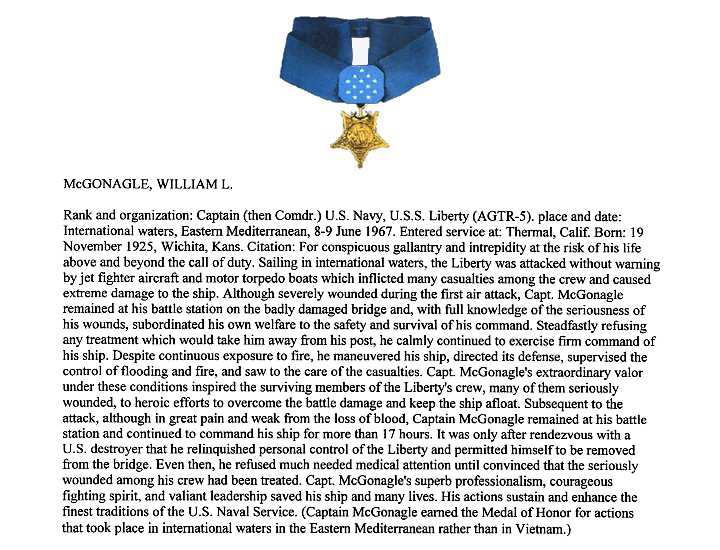 William Loren McGonagle was born on November 19, 1925, in Wichita, Kansas.  After attending secondary school and college in California he enlisted in the Navy in 1944 and for the next three years participated in a Navy training program at the University of Southern California.  In June 1947 he was commissioned as an Ensign in the Navy.  He was first assigned to the USS FRANK KNOX (DD-742) and then to the minesweeper USS PARTRIDGE (AMS-31).  During the Korean War he served on the minesweeper USS KITE (AMS-22) and during this service received a Presidential Unit Citation.  From 1951 to 1966 he was assigned to various positions ashore and afloat, including commands of the fleet tug USS MATACO (AT-86) and the salvage ship USS RECLAIMER (ARS-42).

In April 1966 he took command of the intelligence gathering ship USS LIBERTY (AGTR-5).  On June 8, 1967, during the height of the Six-Day War between Israel and Egypt, LIBERTY was sailing in the Eastern Mediterranean in international waters north of the Sinai Peninsula about 25 nautical miles northwest from the Egyptian city of Arish.  At about 1358 the ship was attacked by Israeli forces.  The Israeli government claimed the ship was mistakenly thought to be an Egyptian vessel and attacked it with jets, helicopters and motor torpedo boats.  McGonagle was severely wounded during the first air attack but remained in command throughout the night and the subsequent seventeen hour attack.  Although the bridge sustained heavy damage he stayed and directed the defense of the ship, refusing to leave his post for needed medical attention.  As the Israeli forces continued their attack he maneuvered his ship, directed its defense, supervised the control of flooding and fire, and saw to the care of casualties.  During the attack the order to “prepare to abandon ship” was broadcast and lifeboats were lowered into the water.  Israeli torpedo boats then moved in closer and fired on the lifeboats as well as those still on deck making all of them unusable.  During the attack LIBERTY transmitted several messages reporting they were under attack and although jets were reportedly dispatched from U.S. carriers in the Mediterranean to assist LIBERTY, they never reached LIBERTY as they were recalled during the attack, reportedly on orders from Washington.  It was not until 0600 on June 9 that two U.S. destroyers arrived to assist LIBERTY and McGonagle permitted himself to be removed from the bridge and relinquished command of the ship.  The combined air and sea attack killed 34 crew members including Naval officers, seamen, two Marines and a civilian, wounded 171, and severely damaged the ship.  Although the ship had a 39x24 foot hole in its side and a twisted keel, heroic efforts of the crew kept the ship afloat and it was able to leave the area under its own power.  When the damage to the ship was assessed, 821 rocket and machinegun holes were found in the ship’s hull.  Damage was so extensive that LIBERTY was scrapped.

Israel apologized for the attack and later paid reparations to the United States.  Both the Israeli and U.S. governments conducted inquiries concerning the attack and issued reports that concluded the attack was a mistake due to confusion about the ship’s identity.  Others, including crew members, have vigorously disputed the findings and some have said the attack was most likely deliberate for reasons far too sensitive to be disclosed by the U.S. or Israeli governments and that the truth may never be known.

On June 11, 1968, for his actions during the LIBERTY attack, CAPT McGonagle was presented the Congressional Medal of Honor by the Chief of Naval Operations in an unusual unpublicized ceremony arranged at the Washington, DC, Navy Yard rather than at the White House where by tradition it has been the custom for the President to present the medal.  CAPT McGonagle continued his Navy career holding several more positions until retiring in 1974.  On March 3, 1999, he died in Palm Springs, California, and following services at the Post Chapel at Fort Myer, Virginia, he was buried with full military honors at Arlington National Cemetery with members of the LIBERTY crew in attendance.  His grave is near the common gravesite of six other members of the LIBERTY crew.