Abraham DeSomer was born December 29, 1884, in Milwaukee, Wisconsin, and was awarded the Medal of Honor on January 8, 1915, for his actions during the early stages of the U.S. occupation of Vera Cruz, Mexico.  He joined the Navy in January 1901 and served on the gunboat USS Yorktown during the Philippine Insurrection.  From 1907 to 1911 he was assigned to the battleship USS Nebraska and was promoted to the rank of Chief Petty Officer in 1910.  In 1911 he reported to the battleship USS Utah and while serving on that ship, he saw action during the intervention at Vera Cruz for which he was awarded the Medal of Honor.

In February 1915 he was promoted to the warrant officer rank of Gunner and during the next four years he served on the transport USS Hancock, the armored cruiser USS Montana, and the battleship USS Minnesota.  He was temporarily commissioned as an Ensign in August 1917 and attained the rank of Lieutenant in September 1918.  In the Spring of 1919 he transferred to Naval Training Center, Great Lakes, Illinois.  He was made a permanent Lieutenant in August 1920 and a year later reported to the newly commissioned battleship USS California.  In 1925 he began two more years of duty at Great Lakes, then was assigned to the destroyer tender USS Dobbin and the aircraft carrier USS Lexington before transferring in November 1930 to the Naval Air Station, Pearl Harbor, Hawaii.  Here, in January 1932 he retired from the Navy with the rank of Lieutenant after more than thirty years of continuous service.

In the Summer of 1940, after the fall of France promoted a massive expansion of America’s defenses, DeSomer returned to active duty in the Navy.  In February 1942 he was promoted to the rank of Lieutenant Commander, and he remained on active duty until again retiring in 1946.  He died August 31,1974, and available historical records fail to reveal the disposition of his remains.  A cenotaph memorial marker in his memory is located at the San Francisco National Cemetery in California.

The Medal of Honor citation awarded to DeSomer reads: “The President of the United States of America, in the name of Congress, takes pleasure in presenting the Medal of Honor to Abraham DeSomer, United States Navy, for extraordinary heroism in the line of his profession on board the USS Utah, during the seizure of Vera Cruz, Mexico, 21 and 22 April 1914.”

A letter dated June 13, 1914, from Rear Admiral F.F. Fletcher to the Secretary of the Navy reported the following details concerning DeSomer’s action in Vera Cruz: “On the afternoon of April 21st, DeSomer was placed in charge of a small squad of men and stationed at the corner of a warehouse to eastward of the custom house.  His position was subject to a severe fire from the buildings along Avenida Inadero y Cos, and after several hours of well directed fire he silenced it.  On April 22, when a general advance began, he was sent ahead to locate and silence fire from snipers.  Being an excellent marksman and notably cool, he was especially selected for this work.  Later, when two sections of artillery were sent to join Captain Anderson's command, he performed similar services and was almost continually under direct fire from snipers.  His services in this connection were of more value than a whole squad.”

Secretary of the Navy Josephus Daniels subsequently wrote to DeSomer the following reply: “The Department concurs with the opinion of Rear Admiral Fletcher and highly commends your conspicuous courage, coolness, and skill, which were in accord with and added to the best traditions of the naval service. ... In addition a Medal of Honor and a gratuity of One Hundred Dollars has been awarded you.” 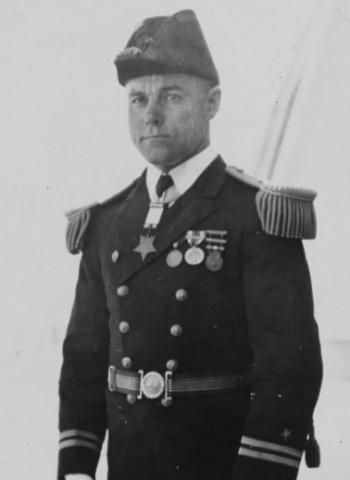