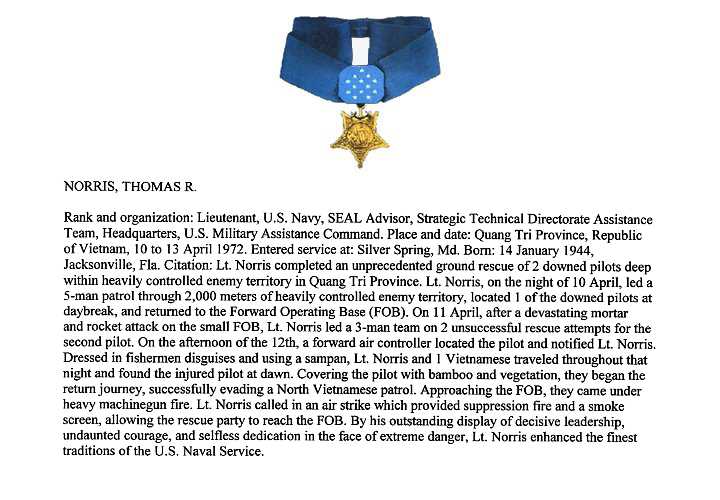 Three days after the "Easter Offensive" began, on April 2, an Air Force EB-66C aircraft, code named BAT-21, was shot down by a SAM. It had been flying a mission in support of a B-52 strike against the North Vietnamese. Only one of four crewmen survived - Lieutenant Colonel Iceal Hambleton. Unfortunately, he landed right in the middle of the attacking enemy force. Although the NVA tried to capture Hambleton, they were repulsed by ordnance dropped from Air Force aircraft in the vicinity. But the Americans were not able to recover Hambleton due to extensive NVA anti-air defenses in the area. Over the next few days, the skies over Hambleton turned into a death trap as 11 airmen were killed, two captured, and five aircraft were shot down attempting to rescue him.

Since air rescue had proven too costly, the decision was made to try and rescue Hambleton and another pilot who had been shot down trying to rescue him, Lieutenant Mark Clark, via ground infiltration through the enemy-held territory. A five-man South Vietnamese commando team was brought in to attempt the daring rescue. The team's American advisor was Lieutenant Norris.

On the night of 10 April, Norris led the team into enemy territory to rescue Clark. Clark was told that he would be picked up by Norris and his men if he could make his way to the river and float down to safety. Unfortunately, just as Clark reached the rendezvous point, so did a NVA patrol and Norris had to let Clark float on by. The team spent the rest of the night avoiding enemy patrols and looking for Clark. Just before dawn, they found him stranded on a sand bar and too exhausted to go any further. Fortunately, they were able to get him back to safety without further adventure.

Hambleton's rescue was more problematic. After 10 days of little food and water, Hambleton was too weak and exhausted to assist in his own rescue. After two unsuccessful sorties looking for Hambleton on April 11, all but one of the remaining South Vietnamese commandos refused to try again on April 12. Undeterred, Norris set out with Petty Officer Nguyen Van Kiet in an abandoned sampan dressed as fishermen. This time they were able to locate Hambleton and bring him on board the sampan. Norris and Kiet then quietly paddled back down the river, evading a number of NVA patrols. As they neared their base camp, they came under heavy machine gun fire. Acting quickly, Norris called in an air strike and they were able to reach safety under the cover of a heavy smoke screen.