The President of the United States takes pride in presenting the Medal Of Honor posthumously to SERGEANT James I. Poynter, United States Marine Corps Reserve, for conspicuous gallantry and intrepidity at the risk of his life above and beyond the call of duty while serving as a Squad Leader in a Rifle Platoon of Company A, First Battalion, Seventh Marines, First Marine Division (Reinforced), in action against enemy aggressor forces during the defense of Hill 532, south of Sudong, Korea, on 4 November 1950.  When a vastly outnumbering, well-concealed hostile force launched a sudden, vicious counterattack against his platoon's hasty defensive position, Sergeant Poynter displayed superb skill and courage in leading his squad and directing its fire against the onrushing enemy.  With his ranks critically depleted by casualties and he himself critically wounded as the onslaught gained momentum and the hostile force surrounded his position, he seized his bayonet and engaged in bitter hand-to-hand combat as the break-through continued.  Observing three machine guns closing in at a distance of 25 yards, he dashed from his position and, grasping hand grenades from fallen Marines as he ran, charged the emplacements in rapid succession, killing the crews of two and putting the other out of action before he fell, mortally wounded.  By his self-sacrificing and valiant conduct, Sergeant Poynter inspired the remaining members of his squad to heroic endeavor in bearing down upon and repelling the disorganized enemy, thereby enabling the platoon to move out of the trap to a more favorable tactical position.  His indomitable fighting spirit, fortitude and great personal valor maintained in the face of overwhelming odds sustain and enhance the finest traditions of the United States Naval Service.  He gallantly gave his life for his country. 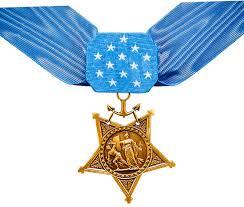