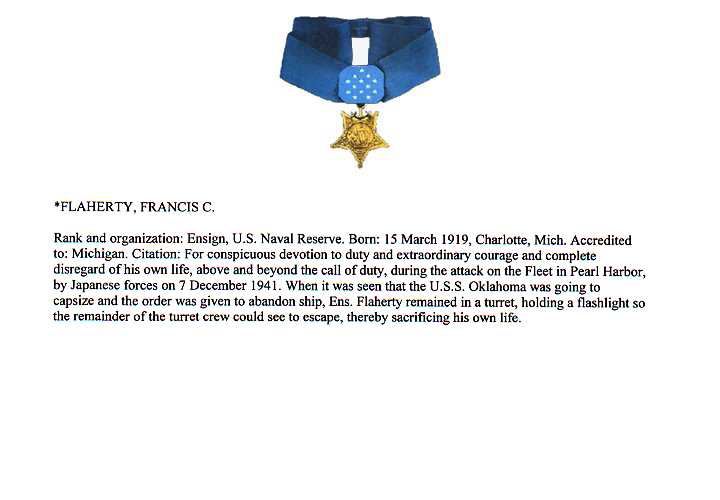 “Hero” is one of those buzzwords often mentioned in mainstream media.  A true hero does not perform heroic actions in the hope of becoming recognized for heroism but is a person who acts in the belief that what he is doing is for the good of others.  Often times a hero is someone who has encountered a significant risk to his own safety.  This sacrifice may take the form of taking risks, or just expending effort generously for the benefit of others.  Without a doubt Francis Charles Flaherty meets the requirements of a hero.

Francis Charles Flaherty was born on March 15, 1919, in Charlotte, Michigan.  He enlisted in the Naval Reserve in July 1940 and was commissioned as an Ensign in December of that year.  At the time of the Japanese attack on Pearl Harbor, ENS Flaherty was serving on board the USS OKLAHOMA.  On the morning of December 7, 1941, OKLAHOMA was moored at Battleship Row adjacent to Ford Island in Pearl Harbor.  The ship was berthed outboard of the USS MARYLAND (BB-46) and was a sitting duck when the Japanese struck the fleet in Pearl Harbor that fateful morning.  An important inspection had been scheduled for OKLAHOMA the next day, so many of the ship’s watertight doors were open to allow easy access for the crew in preparing the ship for the scheduled inspection.  When General Quarters sounded with the announcement, “This is not a drill,” ENS Flaherty undoubtedly dashed to his duty station in one of the ship’s turrets.  As the Japanese began the attack OKLAHOMA became one of their first targets and within several minutes three torpedoes exploded against her port side causing extensive damage below the waterline.  As OKLAHOMA commenced to slowly roll over due to the tremendous amount of flooding seawater, terror reigned below deck and in the darkness men sought to find a way out of the burning, metal coffin.  ENS Flaherty survived the initial attack and as the ship began to capsize he and his gun crew found themselves trapped.  In almost complete darkness ENS Flaherty managed to grab a flashlight and shined its beam on the corridor exit while guiding his crewmates to safety as his ship was capsizing   One of the officers said the last time he saw ENS Flaherty he was knee deep in water pushing his men toward an exit and the water was rising at a rapid pace.  He helped several of his crewmates escape certain death but lost his own life in the process as OKLAHOMA rolled completely over in barely ten minutes into the battle after being struck by nine torpedoes.  ENS Flaherty was one of the twenty officers and 395 enlisted men who were entombed in OKLAHOMA that morning.

Although 32 crewmembers were subsequently successfully rescued alive from the capsized OKLAHOMA, ENS Flaherty was unfortunately not one of them nor was his body ever identified when the ship was later salvaged.  It must be presumed that his final resting place is the Memorial Cemetery of the Pacific in Honolulu where approximately 390 unidentified men from OKLAHOMA have been buried in common graves which have been simply marked, “UNIDENTIFIED – USS OKLAHOMA – PEARL HARBOR - DECEMBER 7, 1941.”