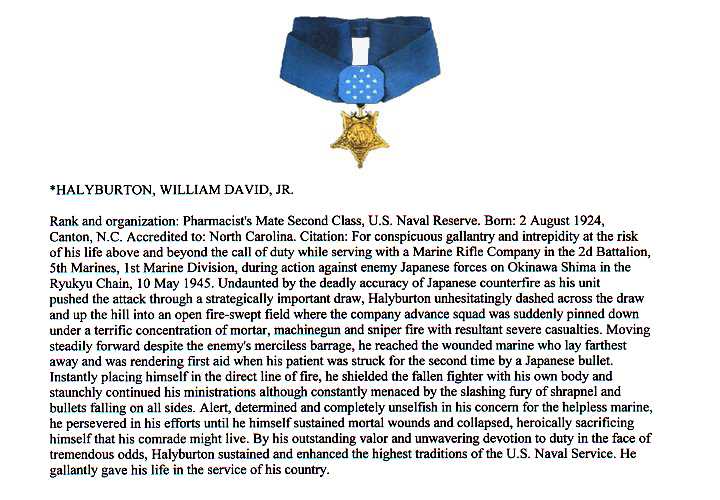 Okinawa was the last major campaign of the Pacific War. Strategically located some 400 miles south of Japan, possession of Okinawa would enable the Allies to cut Japan's sea lines of communication and isolate it from its vital sources of raw materials in the south. If the invasion of Japan proved necessary, Okinawa's harbors, anchorages, and airfields could be used to stage the ships, troops, aircraft, and supplies necessary for the amphibious assault.

The invasion began on April 1, 1945 when 60,000 troops (two Marine and two Army division) landed with little opposition. Although Okinawa was strongly defended by more than 100,000 troops, the Japanese chose not to defend the beaches. Instead, they dug into the caves and tunnels on the high ground away from the beaches in an attempt to negate the Allies' superior sea and air power. The battle proceeded in four phasesL first, the advance to the eastern coast (April 1-4); second, the clearing of the northern part of the island (April 5-18); third, the occupation of the outlying islands (April 10-June 26); and fourth, the main battle against the dug in elements of the 32nd Army which began on April 6 and did not end until June 21. Although the first three phases encountered only mild opposition, the final phase was extremely difficult because the Japanese were well entrenched in and naval gunfire support was ineffective.

The 5th Marine Regiment, part of the 1st Marine Division, participated in the amphibious assault on April 1. Over the next four days, the regiment drove east toward the Katchin Peninsula. The rest of the month was spent sealing burial tombs, demolishing caves, and picking up Japanese stragglers in that area.

On May 1, the 1st Marine Division relieved the 27th Infantry Division and took part in the push south toward Shuri. The 5th Marines was assigned the task of taking the Awacha Pocket, a Japanese stronghold built into the cliffs and gorges. This job proved to be very bloody, often accomplished only by burning defenders alive or sealing them in caves with explosives. On May 10, as his company came under fire from Japanese troops concealed in caves, Halyburton dashed forward through a hail of fire to provide aid to Marines who had been wounded by the Japanese gunfire. As he was rendering first aid to a wounded Marine, the Marine was hit by Japanese bullets a second time. Halyburton reacted by shielding the wounded man with his own body and continued to provide medical assistance to him until Halyburton himself suffered a fatal wound and died.

The battle of Okinaway proved to be the bloodies battle of the Pacific War. There were over 50,000 Allied casualties, including nearly 5,000 Navy dead and almost 8,000 Marine and Army dead. Not surprisingly, the cost of this battle, in terms of lives, time, and material, weighed heavily in the decision to use the atomic bomb against Japan just six weeks later.