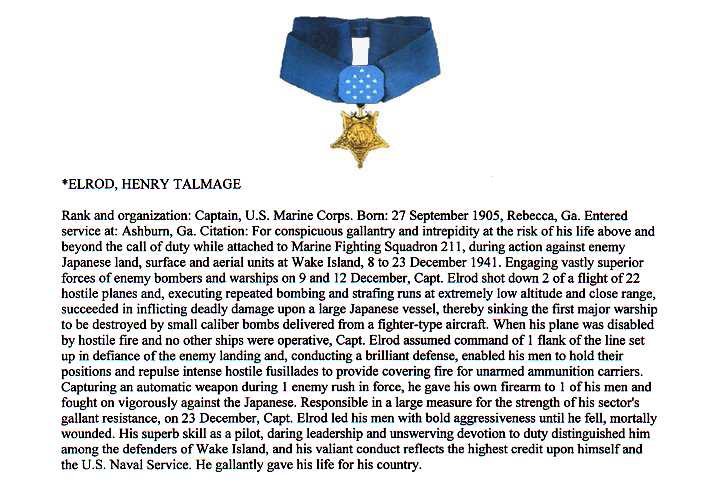 Henry Talmage “Hammerin Hank” Elrod was the first Marine aviator to receive the Medal of Honor during World War II for his heroism in the defense of Wake Island.  He was born on September 27, 1905, in Rebecca, Georgia, attended the University of Georgia and Yale University, enlisted in the Marine Corps in December 1927, and was commissioned a 2NDLT in February 1931.  Following Marine Corps Basic School in Philadelphia, he was ordered to the Naval Air Station, Pensacola, Florida, where he served as a company officer and as student aviator.  In February 1935 he earned his wings and was transferred to Marine Corps Base, Quantico, where he served as a Marine Aviator until January 1938.  In July 1938 he was ordered to a squadron in San Diego and was there until January 1941 when detached to the Hawaiian area.

On December 4, 1941, then CAPT Elrod was one 12 pilots to fly their F4F-3 Wildcat fighters from USS ENTERPRISE to Wake Island.  On December 8, 1941, hostilities commenced on Wake Island when the Japanese launched an air bombing attack against the island.  The initial attack destroyed seven of the 12 aircraft on the ground and in the following days, CAPT Elrod and his fellow pilots, although vastly outnumbered, valiantly fought the Japanese in the air.  On December 12, CAPT Elrod single-handedly attacked a flight of 22 enemy planes and shot down two of them.  He also executed several low-altitude bombing and strafing runs on enemy ships and during one of these attacks he was credited with sinking the first Japanese warship during World War II, the destroyer KISARAGI, with small caliber bombs delivered from a fighter aircraft.  When all of the U.S. aircraft had been destroyed he organized remaining troops into a beach defense unit which repulsed repeated Japanese attacks.  On December 23, 1941, as Wake Island was finally overrun by a numerically superior enemy. CAPT Elrod was mortally wounded while protecting his men who were carrying ammunition to a gun emplacement.  He was posthumously promoted to MAJ on November 8, 1946, and his widow was presented with the Medal of Honor for his heroic actions during the defense of Wake Island.  He was initially buried on Wake Island, but was reinterred in Arlington National Cemetery in October 1947.

Parts of MAJ Elrod’s F4F-3, including the cowling nose ring, tailhook and propeller were believed to have been used in a memorial constructed on Wake Island.  When the memorial was dismantled in 1965 the aircraft parts were sent to the Marine Corps Museum.  When the National Air and Space Museum in Washington, DC, restored its FM-1 Wildcat the only cowling nose ring that could be located was the one taken from the Wake Island memorial.  This part, still bearing battle damage, was incorporated into the restored FM-1 on display in Washington, DC.

The main road leading in to the Marine Corps Officer Candidate School is named after MAJ Elrod; a street aboard the Marine Corps Air Station, Miramar, CA, bears his name; and the frigate USS ELROD (FFG-55) was named in his honor.