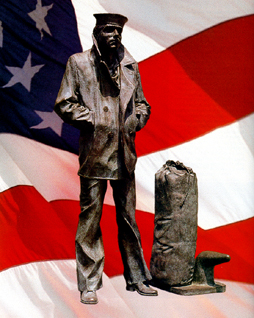 The Boxer Rebellion was a violent anti-foreign and anti-Christian movement which took place in China towards the end of the Qing dynasty between 1898 and 1900.  It was initiated by the Society of Righteous and Harmonious Fists, subsequently called the “Boxers.”  The legations of several nations in Peking and Tientsin were threatened.  An alliance of eight great powers intervened and defeated the Chinese forces.  On June 19, 1900, the First Marine Regiment arrived in China and tried to seize Tientsin but was driven back.  On June 23 the Regiment was finally successful in entering Tientsin where they held tenuously until reinforced by U.S. Army troops on July 12.  In a major engagement the following day, SGT John Mapes Adams was one of four Marines cited for “meritorious conduct” in the engagements at Tientsin.

SGT Adams was born on October 11, 1871, in Haverhill, Massachusetts, and attended Phillips Exeter Academy.  He entered the Marine Corps in October 1894 and served under the alias George Lawrence Day.  He died at the age of 49 on January 6, 1921, and was buried at Cypress Hills National Cemetery in

Brooklyn, New York, where his grave is marked by the name SGT John Mapes Adams, USMC.

“In the presence of the enemy during the battle near Tientsin, China, 13 July 1900, Sergeant Adams distinguished himself by meritorious conduct.”