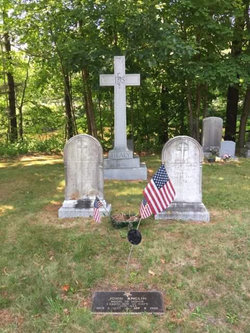 John Anglin was born on October 6, 1850 in Portland, Maine, and entered the Union Navy from Maine.  Anglin served as a Cabin Boy during the Civil War aboard the 990-ton side-wheel gunboat USS Pontoosuc, commissioned in May 1864.  The Pontoosuc participated in the Second Battle of Fort Fisher during which 14-year old Anglin was exposed to enemy fire during the battle and he was one of several crewmembers awarded the Medal of Honor for their gallantry and skill exhibited during the battle.  Anglin is one of the youngest ever awarded the Medal of Honor.  He died on September 6, 1905 and is buried at Calvary Cemetery in South Portland, Maine, where his memorial marker carries the inscription:  MEDAL OF HONOR – CABIN BOY – US NAVY – CIVIL WAR.

The President of the United States of America, in the name of Congress, takes pleasure in presenting the Medal of Honor to Cabin Boy John Anglin, United States Navy, for extraordinary heroism in action while serving on board the U.S.S. Pontoosuc during the capture of Fort Fisher and Wilmington, North Carolina, 24 December 1864 to 22 January 1865.  Carrying out his duties faithfully during this period, Cabin Boy Anglin was recommended for gallantry and skill and for his cool courage while under the fire of the enemy throughout these various actions.