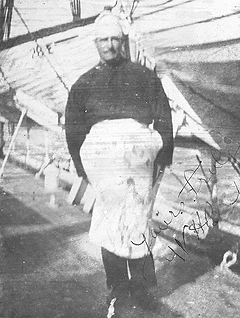 LIFE IN THE NAVY.
AN AUSTRALIAN WHO SERVED IN AMERICA
Mr. W. H. Beipitt, a man of Australian birth, getting on in years, now living at Parramatta in a quiet way, was in the service of the American navy in the early eighties. He was previously in the British navy, but took, as he termed it, "leg ball," and joined the American navy. America'had not much of a fleet in those days, her ships being mostly of the auxiliary class-sail and steam. Still much cruising was done, and many things were seen. The Monocacy, a paddle-wheeler, was In Foochow harbour in 1884, when the French punished the Chinese for the murder of certain missionaries. Negotiations for redress  had failed and the French Government sent a fleet thither. In the harbour were 11 Chinese gunboats and a powerful water battery stood equipped on Pagoda Island. The French had big odds with them, their fleet being much more powerful than the Chinese vessels, but the water battery had to bo reckoned with and the French admiral dispersed his fleet so as to bg beyond the sweep of the guns, while within sight of the rear of the battery. The only thing that barred the training of the French guns on the battery's rear was the corner of a massive American business structure. The ingenious Frenchmnn, however, soon overcame that difficulty, when actual hostilités were in full swing. In four minutes his powerful guns sank nine of the Chinese gunboats and the two remaining ones ran aground. He then turned his attention to the fort. The French guns wero carefully trained on to the corner of the American building. So true was the aim that just enough of the corner was demolished to get a clear shot at the fort. Attacked thus unexpectedly In the rear with no chance of defending themselves those of the Chinese who were able to get away ran. Ina very little while the battery was merely a heap of smoking debris. What diplomacy had failed to accomplish the mailed fist achieved. That is the story Mr. Belpltt tells and he says the French practice was described on all sides as one of the prettiest bits of shooting ever seen. Belpitt was' six years in the American navy and expresses sorrow that he ever left it. He says that from the men's point of view life is better in the American navy than in the British. He found the discipline less strenuous, the pay better and the officers more in touch with the men. Officers would come and chat with the men when off duty, and a great spirit of comradeship always prevailed. Belpitt has a gold medal for gallant and meritorious conduct, having saved a Chinaman from drowning at Foochow and is in possession of ship's papers, which show that his conduct throughout his career In tho fleet was "First Class."