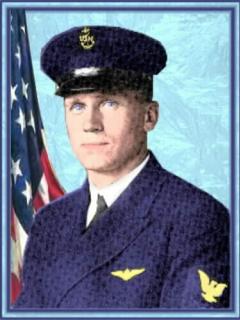 Prior to 1919 a small select group of U.S. Navy enlisted men became pilots after flight training by aircraft companies and several European countries.  By late 1919, the Bureau of Navigation announced that a class of 25 enlisted men had been ordered to the Naval Air Station, Pensacola, Florida, the first enlisted group to receive flight training and the graduates would be certified as a Naval Aviation Pilot (NAP).  Floyd Bennett was one of the enlisted men and became NAP-#9 upon graduation in 1920.

Floyd Bennett was born on October 25, 1890 in Warrensburg, New York.  He reportedly left school at the age of 17 to become an auto mechanic.  When the U.S. entered World War One, Bennett enlisted in the U.S. Navy in 1917, served as an aviation mechanic during the war and elected to stay in the Navy when the war ended.  In 1925, Bennett served with the noted explorer Lieutenant Commander Richard E. Byrd during an aviation survey of Greenland.  Bennett caught the attention of LCDR Byrd, became his personal pilot and close friend.  The flights were fraught with danger and on one occasion while flying over extremely rough territory, the plane’s oil gauge suddenly climbed.  Had the pressure risen unchecked, an explosion was almost certain.  Byrd turned to Bennet seeking a course of action and within seconds when they realized there was no possibility of landing, Bennett climbed out onto the plane’s wing in frigid conditions, loosened the oil cap and relieved the pressure.  Bennett suffered frostbite in the process but left no doubt in Byrd’s mind that he had made the right choice in using Bennett as his pilot.

The following year when LCDR Byrd planned a flight over the North Pole he chose Bennett to be the pilot of the Fokker trimotor monoplane which they flew from Spitsbergen, Norway, to what they believed to be the North Pole and back on May 9, 1926.  For their feat of being the first to fly over the Pole, both men became rock-star personas and were both awarded the Medal of Honor for their accomplishment.  Bennett thus became the third NAP to receive the Medal of Honor.  Lauded as national heroes, Byrd and Bennet were in great demand but to the surprise of no one, Bennett remained unchanged.

The next challenge the team of Bennett and Byrd undertook was to win the Orteig Prize to be the first to fly nonstop from New York to Paris.  But during a training flight they experienced a crash, both men were injured, and before the pair could recover and continue the pursuit of their goal, Charles A. Lindberg accomplished the historic feat in May 1927.

Seeking new horizons to conquer, aviation’s most famous team planned an expedition to the South Pole but unfortunately Bennett was no longer available when Byrd later made the flight.  While making preparations for their next adventure, Bennett became ill with what was believed to be a cold.  When word arrived that two world famous aviators were in need of assistance after crashing on Greenly Island north of Newfoundland, Canada, it was characteristic that Bennett rushed to respond to their aid.  Reaching Quebec City, Canada, Bennett’s condition worsened, requiring hospitalization, where doctors found he was gravely ill with pneumonia.  Despite the best efforts of physicians, Bennett succumbed on April 25, 1928.

Though Bennett had died, the rescue mission he had begun proved successful and world wide headlines mourned the loss of a hero who had given his life while trying to save others.  Explorers, adventurers, and aviators praised Bennett as a man of grace, intelligence, bravery, and unfailing integrity.  The nation mourned his passing and he was honored with a heavily attended military funeral in Washington, followed by burial in Arlington National Cemetery.  Following his death, several air fields were named in his honor and additionally the USS Bennett (DD-473) was named for him and served throughout World War Two, earning nine service stars.