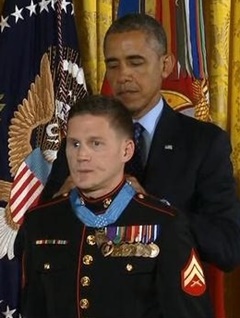 “For conspicuous gallantry and intrepidity at the risk of his life above and beyond the call of duty while serving as an Automatic Rifleman with Company F, 2nd Battalion, 9th Marines, Regimental Combat Team 1, 1st Marine Division (Forward), I Marine Expeditionary Force (Forward), in Helmand Province, Afghanistan, in support of Operation ENDURING FREEDOM on 21 November 2010.  Lance Corporal Carpenter was a member of a platoon-sized coalition force, comprised of two reinforced Marine rifle squads partnered with an Afghan National Army squad.  The platoon had established Patrol Base Dakota two days earlier in a small village in the Marjah District in order to disrupt enemy activity and provide security for the local Afghan population.  Lance Corporal Carpenter and a fellow Marine were manning a rooftop security position on the perimeter of Patrol Base Dakota when the enemy initiated a daylight attack with hand grenades, one of which landed inside their sandbagged position.  Without hesitation and with complete disregard for his own safety, Lance Corporal Carpenter moved toward the grenade in an attempt to shield his fellow Marine from the deadly blast.  When the grenade detonated, his body absorbed the brunt of the blast, severely wounding him, but saving the life of his fellow Marine.  By his undaunted courage, bold fighting spirit, and unwavering devotion to duty in the face of almost certain death, Lance Corporal Carpenter reflected great credit upon himself and upheld the highest traditions of the Marine Corps and the United States Naval Service.”

President Obama awarded the Medal of Honor on June 19th to Marine Corporal William Kyle Carpenter, celebrating the veteran’s heroism and the modern medical miracle it took to keep him alive after he was rocked with a grenade blast while attempting to shield a fellow Marine from harm.  Carpenter received the award in a ceremony in the East Room of the White House flanked by his family and dozens of Marines from his unit.  He is credited with deliberately lunging at a hand grenade after an insurgent tossed it at him and another Marine while they manned a rooftop security post in a small, dusty compound in Marjah, Afghanistan.  Carpenter still bears the scars of that November 21, 2010, incident but has made a remarkable recovery.  He has run a marathon, sky-dived and completed a mud-run competition since being injured, the president noted, and pushed through physical therapy and surgeries to retire medically and attend the University of South Carolina.

“You’ll notice that Kyle doesn’t hide his scars. He’s proud of them and the service they represent,” Obama said.  In a lighter moment, he added: “And now he tells me this and I’m just quoting him: He says the girls like it.  So he’s working an angle on this thing.  I wasn’t sure I was supposed to stay that in front of Mom.”  The fact that Carpenter was able to laugh in response is a testament to modern medicine and quick work by both his doctors and his fellow service members. Carpenter’s vital signs flat-lined numerous times after he was injured, Obama recalled, but the Marine was resuscitated each time.  “I want you to consider what Kyle has endured just to stand here today.  More than two and a half years in the hospital, grueling rehabilitation, brain surgery to remove shrapnel from his head, nearly 40 surgeries to repair a collapsed lung, fractured fingers, a shattered arm broken in more than 30 places and multiple skin grafts,” Obama said.  “He has a new prosthetic eye, new teeth, and one hell of a smile.”

“Today is also a reminder that in past wars, somebody with injuries as severe as Kyle’s probably wouldn’t have survived,” Obama said.  “So many of our wounded warriors from today’s wars are alive not just because of remarkable advances in technology, but primarily because of the extraordinary dedication and skill of our military and VA medical professionals.”  Carpenter is the second living Marine to receive the nation’s highest award for valor in combat since the Vietnam War.  After the ceremony Carpenter told media at the White House that he was honored and humbled to accept the Medal of Honor, but was doing so “with a heavy heart.”  “As the president put the medal around my neck, I felt the history and the weight of a nation,” he said, recalling Marines who fought everywhere from the trenches of World War I, to the icy battlefields of Korea, to cities in Iraq like Baghdad, Ramadi and Fallujah.  “I think about the Marines who were with me in Marjah,” he continued.  “If I close my eyes today, I can still hear their desperate medevacs being called out over the radio as they bled out in the fields of Afghanistan.  Today, I accept the medal for them.  I will wear it for every person who makes up our great nation.”