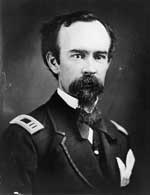 Excerpts from article published on 5/22/2015 in San Diego Union-Tribune in series on “Veterans Who Made A Difference To Their Country”:

SERVING ON THE FRONTIER

Mason Carter was just 14 when he enlisted in the U.S. Navy, launching a military career that would span nearly 50 years and earn him the nation's highest military decoration, the Medal of Honor.  Today, a 14-year-old wouldn't be allowed to enlist.  But in the pre-Civil War era, it wasn't unusual for someone as young as 11 or 12 to sign up.  Pre-teens who joined the Navy were sometimes called powder monkeys because their job was to bring gun powder to load cannons.  Small people were needed to reach the tight confines where the cannons were mounted.  Other young enlistees served as drummer boys.  In Carter's case he went to sea as a midshipman and later attended the U.S. Naval Academy.  He failed the final exam several times, then left the Navy.  He re-enlisted, this time with the Army, in 1860 and continued his service until his compulsory retirement at age 64 in 1898.

During the Civil War, Carter was wounded at the Battle of Wilson's Creek on August 10, 1861.  After that conflict ended, he served for nearly 20 years on what were then our Indian frontiers.  Serving on the frontier in the 1870s and 1880s was no easy life.  The officers and enlisted men of that era had to face many difficulties and dangers from living in remote locations, to enduring severe weather, to battling Indian tribes that opposed their presence.  They were a pretty rough and tumble group of guys.  It was a very tough life and it was lonely.  As far as the development of the West, it couldn't have occurred without them.

Carter received the Medal of Honor during his Army service during the Indian Wars for his heroism on September 30, 1877, at Bear Paw Mountain, Montana.  According to the book "Deeds of Valor, Vol. II," by Walter Frederick Beyer and Oscar Frederick Keydel, Carter was part of a force that had surrounded a camp of Nez Perce Indians.  When a fellow officer was wounded, Carter continued the charge and "succeeded in dislodging the Indians, inflicting heavy loss upon them," the authors wrote.  His Medal of Honor citation noted that he had led the charge "under galling fire."  "This affair, which was one of the bloodiest and most fiercely contested battles ever fought against Indians, resulted in the surrender of Chief Joseph and his band of Nez Perces to General Miles," Huggins wrote.

After retiring from active duty in the military, Carter accepted an appointment as a professor of military science and tactics at the University of the South in Sewanee, Tennessee.  Suffering from poor health, Carter left Sewanee "for the balmy climate of San Diego, where he lived a quiet and secluded life until his death," Huggins wrote.  "He was walking about the day before his death and retained to the last his erect figure and his military bearing," Huggins added.  Carter, a Georgia native, was a cousin of Cassius M. Carter, San Diego County's District Attorney from 1902 to 1906.  He also was related to U.S. Senator James Murray Mason of Virginia.  And his maternal grandfather, Thomas Flournoy, was an Army general during the War of 1812.  Carter, who served in the Army's 5th Infantry Regiment, is buried at Fort Rosecrans National Cemetery in San Diego. Next to him is the plot for his wife, Lucie, who died in 1938.