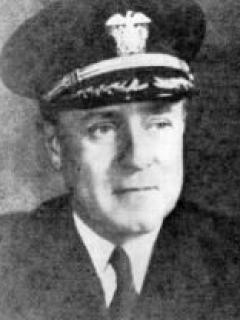 Robert Webster Cary Jr. was born on August 18, 1890 in Kansas City, Missouri.  He entered the University of Missouri in the fall of 1908 but left after the first semester of the following year and entered the U.S. Naval Academy where he graduated in 1914.  Scarcely a year after graduating from the Naval Academy he was awarded the Medal of Honor for his heroic action following a boiler explosion aboard the USS SAN DIEGO and is credited with having saved the lives of three men who were in the boiler room.  He also took charge of the situation in the adjacent boiler room, putting out the fires and thus preventing the explosion of these boilers.  During World War I, while serving on the destroyer USS SAMPSON, he was awarded the Navy Cross for his actions in securing depth charges which had broken loose during heavy seas, menacing the safety of the ship.

During the years between World War I and World War II, Cary served in many capacities and many stations.  He served as the Director of Base Maintenance and in the Office of Chief of Naval Operations where he initiated the establishment of bases at home and abroad at the commencement of World War II.  He also served with great distinction during World War II when he took part in various campaigns in the European Theater.  By the time Cary retired in 1945 he had achieved the rank of Rear Admiral.  During his career his notable awards included the Medal of Honor, Navy Cross, Legion of Merit with 4 oak leaf clusters and Distinguished Service Order (British Award).  RADM Cary died on July 15, 1967 and was buried at Arlington National Cemetery.

For extraordinary heroism in the line of his profession on the occasion of an explosion on board the USS SAN DIEGO (ACR-6), 21 January 1915, LCDR Cary (then Ensign), United States Navy, an observer on duty in the firerooms of the USS SAN SIEGO, commenced to take the half-hourly readings of the steam pressure at every boiler.  He had read the steam and air pressure on No. 2 boiler and was just stepping through the electric watertight door into No. 1 fireroom when the boilers in No. 2 fireroom exploded.  Ensign Cary stopped and held open the doors which were being closed electrically from the bridge, and yelled to the men in No. 2 fireroom to escape through these doors, which 3 of them did.  Ensign Cary’s action undoubtedly saved the lives of these men.  He held the door probably a minute with the escaping steam from the ruptured boilers around him.  His example of coolness did much to keep the men in No. 1 fireroom at their posts hauling fires, although 5 boilers in their immediate vicinity had exploded and boilers Nos. 1 and 3 apparently had no water in them and were likely to explode any instant.  When these fires were hauled under Nos. 1 and 3 boilers, Ensign Cary directed the men in this fireroom into the bunker, for they well knew the danger of these 2 boilers exploding.  During the entire time Ensign Cary was cool and collected, and showed an abundance of nerve under the most trying circumstances.  His action on this occasion was above and beyond the call of duty.

The President of the United States of America takes pleasure in presenting the Navy Cross to Lieutenant Robert Webster Cary, United States Navy, for extraordinary heroism on November 7, 1918, when the depth charges on the stern of the USS SAMPSON (DD-63) broke adrift in a heavy gale and were thrown about in such a manner as to involve danger of serious damage to the ship and the possibility of an explosion in case the safety fork of one of the depth charges should work loose.  Lieutenant Cary, Executive Officer of the ship, accompanied by several enlisted men, secured the depth charges, working on the fantail when heavy seas were breaking over it, adding the danger of being washed overboard to that connected with the possible explosion of the depth charges.