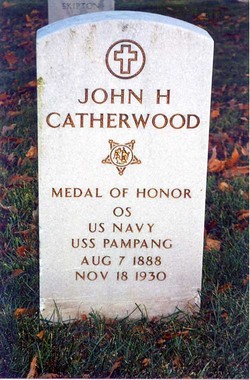 John Hugh Catherwood VI was born on August 7, 1888 in Springfield, Illinois.  In September 1911 he was serving as an Ordinary Seaman aboard the USS PAMPANGA (PG-39).  The ship was a schooner-rigged iron gunboat which had been captured by the U.S. Army at Manila Bay in 1898 during the Spanish American War.  In 1911, during the Moro Rebellion in the Philippines, PAMPANGA was ordered to Semut, Basilan Island in the Philippines and a small landing party was sent ashore to reconnoiter the area.  Catherwood was a member of the detachment and as they proceeded toward their objective they were attacked by a larger group of Moro natives, killing the officer leading the group and wounding several of the men, including Catherwood.  For his heroism during the ensuing battle Catherwood was awarded the Medal of Honor.

NOTE:  John Catherwood died on November 18, 1930, and was initially interred at Oak Ridge Cemetery in Springfield, Illinois.  At the request of his family his remains were moved to Camp Butler National Cemetery in Springfield and reinterred on July 17, 1987, where he rests near his two sons, Alfred Stanley Catherwood, MOMM3, and John Hugh Catherwood VII, F2, both of whom served in the Navy during World War II.