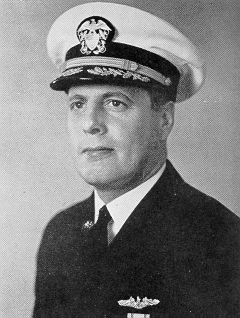 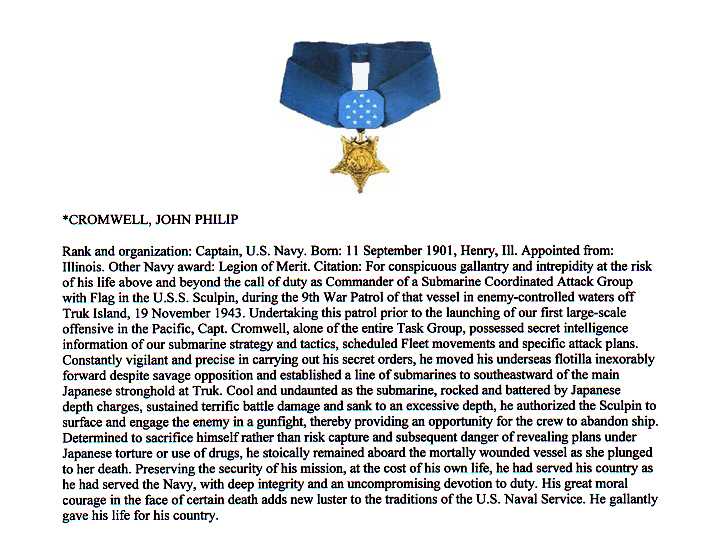 HE  CHOSE  TO  GO  DOWN  WITH  SINKING  SUBMARINE

RATHER  THAN  BECOME  A  JAPANESE  POW

John Philip Cromwell was born on September 11, 1901, in Henry, Illinois, but his heart took him from the Midwest to the ocean.  He graduated from the Naval Academy in 1924.  His initial sea service was on the battleship USS Maryland but his abilities led to him being picked for the fledgling American submarine force.  He served aboard and commanded some of the U.S. Navy's first large submarines.   After several tours at sea he was selected for further training in the complex diesel engines that were critical to submarines of that era.  He rose through the ranks, eventually becoming a division commander.  World War II found now Captain Cromwell in the Pacific commanding Submarine Divisions 203, 43, and 44. His flagship was the USS Sculpin.  In November 1943 Sculpin, with Captain Cromwell aboard, put to sea with orders to rendezvous with two other submarines to form a wolf pack to attack Japanese shipping.  The Americans were preparing to invade the Gilbert Islands later that month.  It would be a critical and bloody fight to wrest control of the central Pacific from Japanese forces.  Cromwell was aware of the operation's details and was also familiar with the top-secret American ability to read Japanese military codes.

On November 18, 1943, while en route to the rendezvous, Sculpin’s radar detected a large Japanese convoy and she made an end around at full power to attack the convoy.   As Sculpin came up her periscope was detected and the convoy made a turn toward Sculpin so that they would present only a bow to the submarine.  After submerging to escape the oncoming convoy Sculpin later resurfaced only to discover that the Japanese destroyer IJN Yamagumo, which had been left behind as a lookout, was waiting only a few hundred yards away.  Yamagumo immediately launched a depth charge attack which severely damaged Sculpin.  A damaged depth gauge caused her to surface rather than go to periscope depth and she came up directly in front of the Yamagumo,  Although Sculpin quickly dived again it was too late.  Yamagumo pounded Sculpin with a series of depth charges, causing severe damage.  With no way to escape, and more destroyers coming, the Commanding Officer decided to surface again and try to fight it out.  Yamagumo was ready.  As Sculpin came up Yamagumo's first salvo killed her entire bridge crew including the Commanding Officer and those running to man the weapons.  Sculpin's surviving senior officer ordered the submarine scuttled and the crew to abandon ship.

Captain Cromwell, Tactical Commander, was below deck during the battle and realized that if revealed, the secrets he knew could seriously jeopardize the American war effort.  He knew the Japanese couldn't be allowed to learn the invasion plans or that the Americans had broken the Japanese codes.  While he knew he wouldn't voluntarily talk he felt there was no guaranteeing he might not break under torture or the influence of interrogation drugs.  He therefore decided to stay with Sculpin forever to insure the enemy could not gain any of the information he possessed.  He helped the crew abandon ship but made no move to leave himself.  He was last seen standing in the control room watching it fill with water.

For his heroism and devotion to country he was posthumously awarded the Medal of Honor.  It was presented to his widow.