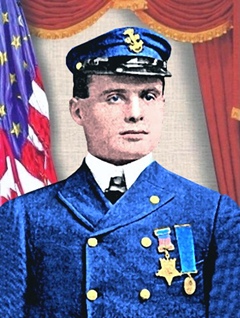 Quarter Gunner John Davis is reportedly the second man awarded the Medal of Honor.  This was for his heroic service in the Union Navy during the Civil War.  On February 10, 1862, he was serving aboard the USS VALLEY CITY when the ship engaged in action against Confederate fort batteries and ships off Elizabeth City, North Carolina.  A cannonball struck the VALLEY CITY which passed through its side and exploded inside the ship.  The explosion shattered bulkheads that screened the power magazine area and a fire started near the ship’s magazine.  In the midst of the wreckage sat an open barrel of highly explosive black powder.  Davis noticed that flames were advancing toward the barrel and having no other item to seal the top of the barrel, without concern for his personal safety he sat on top of the open barrel thus sealing it off from the sparks and preventing an explosion.  When a superior officer arrived to help suppress the fire he found Davis coolly perched on the keg while continuing to pass powder to the decks above.  Numerous sparks caught Davis’ clothing on fire and although severely burned he did not leave his perch until his shipmates succeeded in extinguishing the flames.  Recognizing his heroic act, the Secretary of the Navy appointed Davis to the rank of Acting-Gunner, raising his salary from $300 to $1,000 per year.  Citizens of New York, admiring Davis, raised and presented to him $1,100.  By an Act of Congress in 1861 and signed by President Lincoln, the Medal of Honor was established to “promote efficiency in the Navy” and to recognize men who distinguished themselves by their gallantry in action or “other seaman like qualities.”  The Medal of Honor presented to Davis is inscribed, “Personal Valor – John Davis, Gunner’s Mate, USS Valley City, Albemarle Sound, February 10, 1862.”

The President of the United States of America, in the name of Congress, takes pleasure in presenting the Medal of Honor to Quarter Gunner John Davis, United States Navy, for extraordinary heroism in action on board the USS VALLEY CITY during action against rebel fort batteries and ships off Elizabeth City, North Carolina, on 10 February 1862.  When a shell from the shore penetrated the side and passed through the magazine, exploding outside the screen on the berth deck, several powder division protecting bulkheads were torn to pieces and the forward part of the berth deck set on fire.  Showing great presence of mind, Quarter Gunner Davis courageously covered a barrel of powder with his own body and prevented an explosion, while at the same time passing powder to provide the division on the upper deck while under fierce enemy fire.

Little personal information concerning Davis has been preserved.  Some accounts report he was born in Finland whereas others report he was born in Cedarville, New Jersey, joined the Union Navy from that state and died at the New York City Naval Hospital in November 1863.  His burial location remains unknown.