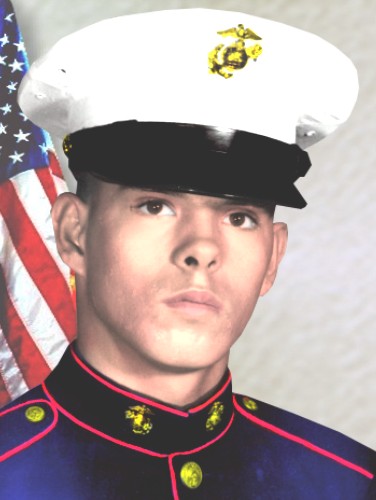 Private First Class Ralph Ellis Dias, who was posthumously awarded the Medal of Honor for heroism in Vietnam, was born on July 15, 1950, in Shelocta, Indiana County, Pennsylvania.  Following graduation from elementary school in 1965 he attended Elderton Joint High School in Elderton, Pennsylvania, for two years before enlisting in the Marine Corps on October 9, 1967, at Pittsburgh, Pennsylvania.  He underwent recruit training at MCRD Parris Island, South Carolina, before being ordered to the 1st Battalion, 28th Marines, 5th Marine Division at Camp Pendleton.  In April 1969 he was ordered to Vietnam for duty as a rifleman with Company D, 1st Battalion, 7th Marines, 1st Marine Division.  During an engagement on November 12, 1969, PFC Dias was mortally wounded.  For his selfless heroic actions that day he was posthumously awarded the Medal of Honor.

For conspicuous gallantry and intrepidity at the risk of his life above and beyond the call of duty, while serving as a Rifleman with Company D, First Battalion, Seventh Marines, First Marine Division in the Republic of Vietnam on November 12, 1969.  As a member of a reaction force which was pinned down by enemy fire while assisting a platoon in the same circumstance, Private First Class Dias, observing that both units were sustaining casualties, initiated an aggressive assault against an enemy machine gun bunker which was the principal source of hostile fire.  Severely wounded by enemy snipers while charging across the open area, he pulled himself to the shelter of a nearby rock.  Braving enemy fire for a second time, PFC Dias was again wounded.  Unable to walk, he crawled fifteen meters to the protection of a rock located near his objective and, repeatedly exposing himself to intense hostile fire, unsuccessfully threw several hand grenades at the machine gun emplacement.  Still determined to destroy the emplacement, PFC Dias again moved into the open and was wounded a third time by sniper fire.  As he threw a last grenade which destroyed the enemy position, he was mortally wounded by another enemy round.  PFC Dias' indomitable courage, dynamic initiative, and selfless devotion to duty upheld the highest traditions of the Marine Corps and the United States Naval Service.  He gallantly gave his life in service to his country.