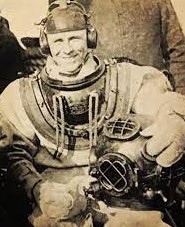 Thomas Eadie was born April 8, 1887, in Glasgow, Scotland.  He enlisted in the U.S. Navy on July 6, 1905, rose to the rate of Chief Gunner’s Mate, and was also trained as a diver.  While serving as a Chief Gunner’s Mate in the 1920s, he assisted in salvage work on the sunken submarines USS S-51 and USS S-4, receiving the Navy Cross for each operation.  In addition, he received the Medal of Honor for extraordinary heroism in rescuing a fellow diver on December 18, 1927, while working on the USS S-4 salvage.  CGM Eadie retired from active duty on February 1, 1939, but returned to active service on April 30, 1942, during World War II and was appointed to Chief Gunner (Warrant Officer).  He was promoted to Ensign on August 15, 1942, and to Lieutenant on July 1, 1944, and retired with that rank in September 1946.  Thomas Eadie died at Brockton, Massachusetts, on November 14, 1974, and is buried at Island Cemetery in Newport, Rhode Island.

The President of the United States of America, in the name of Congress, takes pleasure in presenting the Medal of Honor to Chief Gunner's Mate Thomas Eadie, United States Navy, for extraordinary heroism in the line of his profession above and beyond the call of duty on 18 December 1927, as a member of the Submarine and Rescue Salvage Unit, U.S.S. Falcon, during the diving operations in connection with the sinking of the USS S-4 with all on board, as a result of a collision off Provincetown, Massachusetts.  On this occasion when Michels, Chief Torpedoman, U.S. Navy, while attempting to connect an airline to the submarine at a depth of 102 feet became seriously fouled, Chief Gunner's Mate Eadie, under the most adverse diving conditions, deliberately, knowingly, and willingly took his own life in his hands by promptly descending to the rescue in response to the desperate need of his companion diver.  After two hours of extremely dangerous and heartbreaking work, by his cool, calculating, and skillful labors, he succeeded in his mission and brought Michels safely to the surface. 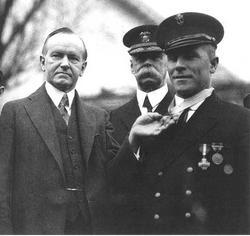