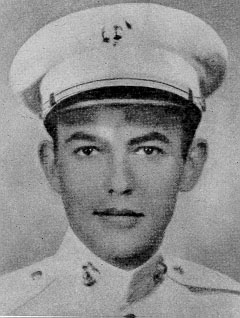 MAY  HAVE  RECEIVED  FIRST  USMC  MOH  IN  WWII

Richard Eugene Fleming was born November 2, 1917, in St. Paul, Minnesota.  He attended Saint Thomas Military Academy, graduated in 1935, and in his senior year was chosen as top student officer.  He next attended the University of Minnesota where he graduated in 1939.  Shortly after graduation, he enlisted in the Marine Corps Reserve and applied for flight training.  He finished flight training in 1940 and was at the top of his class.  He was promoted to first lieutenant in April 1942 and to captain a month later.  His first duty station was the Naval Air Base, San Diego, California and in mid-December 1941 flew to Midway Island as a flight officer of Marine Scout Bombing Squadron 241.  On June 4, 1942, during an attack on a Japanese carrier during the initial phases of the Battle of Midway, Fleming took command of the unit when the commanding officer was killed.  The next day he led a formation of VMSB-241 aircraft in an attack on the Japanese heavy cruiser IJN Mikuma and was killed during the engagement.

Details of Fleming’s death are confused, and modern historians challenge the stories.  One account attributed to a Japanese officer and Fleming’s wingman, reports that as he dove toward Mikuma, he was hit by antiaircraft fire, setting his plane on fire.  Despite being mortally wounded and successfully releasing his bomb which landed in the ocean near the stern, he reportedly attempted a daring suicide crash into Mikuma’s bridge but missed the bridge and crashed into the aft turrets.  The resulting explosion reportedly spread fire over the air intake of the starboard engine room and caused an explosion of gas fumes below, killing all hands working in the engine room.  A photograph taken of Mikuma the following morning shortly before it was sunk during another air attack shows wreckage atop the aft turret which some have claimed was Fleming’s aircraft.  Historians dispute this story citing logic errors and inaccuracies.

A second story reports that Mikuma suffered catastrophic damage from the detonation of her own Type 93 torpedo mounts which were located immediately forward of the aft turret.  The resulting explosions largely destroyed the aft portion of Mikuma’s funnel, as well as her rear superstructure and mast, and this accounts for the wreckage on her turret roof.  Of interest is that Japanese historical records were very accurately recorded and make no mention of a hit by an enemy aircraft.  Thus, this argument may never be settled.

What is undisputed is that Fleming crashed and died during his attack on Mikuma and was subsequently awarded the Medal of Honor which may have been the first award of the medal to a Marine Corps personnel during World War II.  As his remains were not recovered his name is inscribed on the Tablets of the Missing at the National Memorial Cemetery of the Pacific in Honolulu, Hawaii.  In his honor the USS Fleming DE-32 was commissioned on September 18, 1943.

The President of the United States of America, in the name of Congress, takes pride in presenting the Medal of Honor (Posthumously) to Captain Richard Eugene Fleming (MCSN: 0-6395), United States Marine Corps, for extraordinary heroism and conspicuous devotion to duty as Flight Officer and a Pilot in Marine Scout-Bombing Squadron TWO HUNDRED FORTY-ONE (VMSB-241), Marine Air Group TWENTY-TWO (MAG-22), Naval Air Station, Midway, during operations of the U.S. Naval and Marine Forces against the invading Japanese Fleet during the Battle of Midway on 4 and 5 June 1942.  When his Squadron Commander was shot down during the initial attack upon an enemy aircraft carrier, Captain Fleming led the remainder of the division with such fearless determination that he dived his own plane to the perilously low altitude of 400 feet before releasing his bomb.  Although his craft was riddled by 179 hits in the blistering hail of fire that burst upon him from Japanese fighter guns and anti-aircraft batteries, he pulled out with only two minor wounds inflicted upon himself.  On the night of 4 June, when the squadron commander lost his way and became separated from the others, Captain Fleming brought his own plane in for a safe landing at its base despite hazardous weather conditions and total darkness.  The following day, after less than four hours' sleep, he led the second division of his squadron in a coordinated glide-bombing and dive-bombing assault upon a Japanese battleship.  Undeterred by a fateful approach glide, during which his ship was struck and set afire, he grimly pressed home his attack to an altitude of 500 feet, released his bomb to score a near miss on the stern of his target, then crashed to the sea in flames.  His dauntless perseverance and unyielding devotion to duty were in keeping with the highest traditions of the U.S. Naval Service.