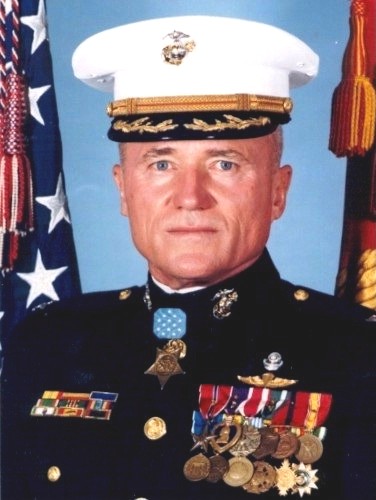 Colonel Wesley Lee Fox, USMC (Ret), is one of the legendary war heroes within the Marine Corps.  He was born on September 30, 1931, in Herndon, Virginia.  He enlisted in the Marine Corps on August 4, 1950, just before his 19th birthday.  Upon completion of recruit training at MCRD Parris Island he was assigned as a rifleman with Company A, 3rd Battalion, 5th Marines.  He was wounded in action in Korea on September 8, 1951, and recovered from his injuries at the Navy Hospital in Bethesda, Maryland.  For his service in Korea he was awarded the Bronze Star with Combat “V”.  He was sent back to Korea in 1954 as a Platoon Sergeant.  When he returned from Korea, he was assigned to duty as both a drill instructor (1955 to 1957) and a recruiter (1957 to 1960). He was promoted to First Sergeant in May 1966.  Shortly afterwards, he was commissioned as a Marine Second Lieutenant.

Fox served in the Vietnam War for 13 months as an adviser to the Vietnamese Marine Corps.  In November 1968 he became the Company Commander of Company A, 1st Battalion, 9th Marines.  On February 22, 1969, then 1STLT Fox was instructed by his commander to go into the A Shau Valley near the Laotian border to determine whether an enemy force was trying to get back a pair of 155mm guns that American forces had earlier captured.  If they were, 1STLT Fox was told to stop them.  His team was smaller than ideal, did not have a mortar platoon and was in the middle of concealed North Vietnamese forces behind fortified positions.  Fox decided to hit the enemy head on but as the company was getting ready a rocket propelled grenade exploded near him, ripping his shoulder with shrapnel.  In the ensuing battle everyone in the command group except for the Executive Officer was wounded but 1STLT Fox kept moving forward through heavy fire.  While engaged with the enemy a sniper killed one of his men and 1STLT Fox took the fallen man’s rifle, killing the sniper.  He moved his reserve platoon to support the assault platoons, and as he gave directions, a mortar round exploded, wounding him again and seriously injuring the Platoon Commander.  1STLT Fox instructed the Executive Officer to take charge of the reserve platoon but within minutes the Executive Officer was also killed.  When he was finally able to call in air support after the weather cleared, planes were able to destroy one of the machine guns blocking the advance and the North Vietnamese troops began a retreat.  1STLT Fox became the only officer left in his company capable of resistance but he refused medical treatment for his injuries in order to direct and defend his men, and prepare the wounded for evacuation.  Eleven of his men were killed and 58 wounded.  The North Vietnamese had 105 killed.  For his heroic actions that day 1STLT Fox was awarded the Medal of Honor.

After 43 years he retired from the Marine Corps as a full Colonel in September 1993 at the mandatory age of 62.  During his illustrious career he held every enlisted rank except Sergeant Major and every officer rank except General.  He continued to wear the uniform for eight more years as Deputy Commandant of Cadets for the Virginia Tech Corps of Cadets.  COL Fox has written a book about his experiences in the military, “Marine Rifleman: Forty-Three Years in the Corps” and was featured on the 2003 PBS program “American Valor.”

For conspicuous gallantry and intrepidity at the risk of his life above and beyond the call of duty while serving as Commanding Officer of Company A, 1st Battalion, 9th Marine Regiment, 3rd Marine Division, in action against the enemy in the northern A Shau Valley.  Captain (then 1st Lieutenant.) Fox's company came under intense fire from a large well concealed enemy force.  CAPT Fox maneuvered to a position from which he could assess the situation and confer with his platoon leaders.  As they departed to execute the plan he had devised, the enemy attacked and CAPT Fox was wounded along with all of the other members of the command group, except the Executive Officer.  CAPT Fox continued to direct the activity of his company.  Advancing through heavy enemy fire, he personally neutralized one enemy position and calmly ordered an assault against the hostile emplacements.  He then moved through the hazardous area coordinating aircraft support with the activities of his men.  When his Executive Officer was mortally wounded, CAPT Fox reorganized the company and directed the fire of his men as they hurled grenades against the enemy and drove the hostile forces into retreat.  Wounded again in the final assault, CAPT Fox refused medical attention, established a defensive posture, and supervised the preparation of casualties for medical evacuation.  His indomitable courage, inspiring initiative, and unwavering devotion to duty in the face of grave personal danger inspired his marines to such aggressive action that they overcame all enemy resistance and destroyed a large bunker complex.  CAPT Fox's heroic actions reflect great credit upon himself and the Marine Corps and uphold the highest traditions of the U.S. Naval Service