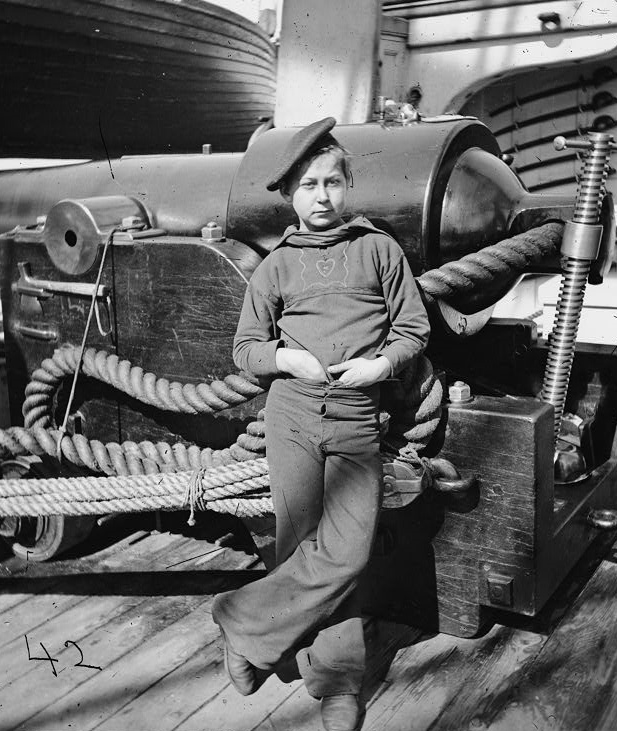 In 1861, President Abraham Lincoln announced that boys under eighteen could enlist in the military forces only with their parents’ consent.  The next year he prohibited any enlistment of those under eighteen but heavy casualties during the Civil War led recruiting officers to often look the other way when under-aged boys tried to enlist.  In the Navy it had been the practice to enlist young boys between the ages of 11 and 18 since the Navy’s inception.  Usually serving three year terms, the young boys regularly became Powder Monkeys whose primary role was to run powder and shot to guns during battle.  At other times the young boys also served as personal assistants to officers, were cook’s helpers and general helpers for whoever needed them to do odd jobs.  In the age of sail, the job of Powder Monkey was critical as gun powder was stored in magazines below the waterline as it was too dangerous to have large amounts of powder on deck in case of an explosion.  It was preferred to have young boys carry the powder to the cannon crew as the job required speed and small size.  Speed was obvious and the small size helped to reduce them from being a target from enemy sharpshooters.

The Library of Congress collection of Civil War photographs includes one showing a young Powder Monkey reportedly standing beside a 100-pound Parrot Rifle aboard the USS NEW HAMPSHIRE, a 74-gun ship of the line.  Historians have identified the boy as Aspinwall Fuller, age 14, who ran away from his home in Baltimore, Maryland, at the age of 13 and joined the Union Navy.  While it may seem wrong today for someone of his age to serve in the military, it was quite common during the Civil War.  Often bored of farm life, boys enlisted claiming they did not know their true age or merely claimed to be 18 as proving age was difficult at the time.  Unlike modern children, young boys of the 1800s were often working alongside adults to care for livestock or crops and were rarely students but were more often working as clerks, smiths or in similar wage earning jobs.

Powder Monkey Aspinwall Fuller reportedly served in the Union Navy from 1864 to 1867.  During his adult life he became a Marine Engineer, in 1887 became the President of the Marine Engineer’s Beneficial Association (MEBA) and served in that capacity until his death in 1888.  MEBA has become the oldest and largest maritime officers union in the United States.  At the time of Fuller’s death MEBA issued an obituary which read in part:

No engineer of our acquaintance ever enjoyed so great popularity; his personal appearance added this to some extent, for he was one of the handsomest men we have ever seen, his address was cheerful and pleasant, and he was willing to oblige; he labored with tongue and pen in the cause of the trade and wrote all the letters signed ‘An American Engineer,’ touching upon abuses to which engineers were subjected.”