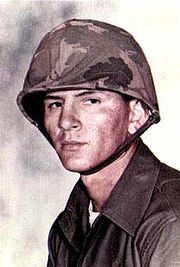 Alfredo Cantu Gonzales was born on May 23, 1946, in Edinburg, Texas.  He graduated from Edinburg High School in 1965 and despite his small size, weighing only 135 pounds, he was an All-District football player in high school.  He enlisted in the Marine Corps Reserve on June 3, 1965, and transferred to the regular Marine Corps on July 6, 1965.  He served a one year tour in Vietnam as a rifleman and squad leader, returning to Camp Lejeune where he became an instructor of guerrilla warfare.  Upon learning that an entire platoon, including men who had served under him during his Vietnam tour, had been killed in an ambush in Vietnam, he requested to be sent back for a second deployment.  On July 1, 1967 he was promoted to Sergeant and arrived that month in Vietnam to serve with Company A, 1st Battalion, 1st Marines, 1st Marine Division.  On February 4, 1968, during a fierce battle, SGT Gonzalez was mortally wounded and for his heroic actions he was awarded the Medal of Honor.

Rank and organization: Sergeant, U.S. Marine Corps, Company A, 1st Battalion, 1st Marines, 1st Marine Division (Rein), FMF.  Place and date: Near Thua Thien, Republic of Vietnam, 4 February 1968.  For conspicuous gallantry and intrepidity at the risk of his life above and beyond the call of duty while serving as platoon commander, 3d Platoon, Company A.  On 31 January 1968, during the initial phase of Operation Hue City, SGT Gonzalez' unit was formed as a reaction force and deployed to Hue to relieve the pressure on the beleaguered city.  While moving by truck convoy along Route No. 1, near the village of Lang Van Lrong, the Marines received a heavy volume of enemy fire.  SGT Gonzalez aggressively maneuvered the Marines in his platoon and directed their fire until the area was cleared of snipers.  Immediately after crossing a river south of Hue, the column was again hit by intense enemy fire.  One of the Marines on top of a tank was wounded and fell to the ground in an exposed position.  With complete disregard for his safety, SGT Gonzalez ran through the fire-swept area to the assistance of his injured comrade.  He lifted him up and though receiving fragmentation wounds during the rescue, he carried the wounded Marine to a covered position for treatment.  Due to the increased volume and accuracy of enemy fire from a fortified machine gun bunker on the side of the road, the company was temporarily halted.  Realizing the gravity of the situation, SGT Gonzalez exposed himself to the enemy fire and moved his platoon along the east side of a bordering rice paddy to a dike directly across from the bunker.  Though fully aware of the danger involved, he moved to the fire-swept road and destroyed the hostile position with hand grenades.  Although seriously wounded again on 3 February, he steadfastly refused medical treatment and continued to supervise his men and lead the attack.  On 4 February, the enemy had again pinned the company down, inflicting heavy casualties with automatic weapons and rocket fire.  SGT Gonzalez, utilizing a number of light antitank assault weapons, fearlessly moved from position to position firing numerous rounds at the heavily fortified enemy emplacements.  He successfully knocked out a rocket position and suppressed much of the enemy fire before falling mortally wounded.  The heroism, courage, and dynamic leadership displayed by SGT Gonzalez reflected great credit upon himself and the Marine Corps, and were in keeping with the highest traditions of the U.S. Naval Service.  He gallantly gave his life for his country.

SGT Gonzalez has been buried at Hillcrest Memorial Park in Edinburg, Texas.  In 1996 the guided missile destroyer USS GONZALEZ (DDG-66) was named in his honor.  The mother of SGT Gonzalez has maintained a very close relationship with the ship and its crew.  She attends many of the ship’s major ceremonies, including departures and arrivals from deployments, and changes of command.  In addition she exchanges letters with members of the crew who call her during deployments and she is respectfully called the ship’s “Mother.”