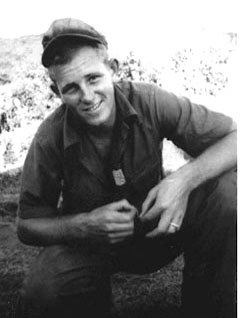 Robert Roland Ingram joined the Navy from Coral Gables, Florida, at the age of 18 in 1963.  In the late spring of 1965 he was assigned as a Hospital Corpsman Third Class to Company C, 1st Battalion, 7th Marine Regiment.  On February 8, 1966, during a fierce engagement, he rushed forward while under fire to treat between 13 and 14 wounded Marines.  For his actions that day he was awarded the Silver Star.  On March 28, 1966, his unit was attacked by a much larger enemy force.  Again HM3 Ingram moved to treat wounded Marines in spite of being wounded himself.  For his heroic actions that day he was recommended for the Medal of Honor.  After HM3 Ingram was discharged from the Navy in 1968, he enrolled in college to pursue a degree in nursing.  He became a registered nurse and eventually worked as a nurse and operations manager at a family practice in his home state of Florida.  During a unit reunion in 1995, the Marines discovered that the original Medal of Honor nomination for HM3 Ingram had been lost.  The nomination was re-submitted and finally, 32 years after the action, Ingram was awarded the Medal of Honor.  President William J. Clinton presented the award to him in a ceremony at the White House on July 10, 1998, 20 years after the last Medal of Honor was awarded to a Navy Sailor.

For conspicuous gallantry and intrepidity at the risk of his life above and beyond the call of duty while serving as Corpsman with Company C, First Battalion, Seventh Marines, against elements of a North Vietnam Aggressor battalion in Quang Ngai Province Republic of Vietnam on 28 March 1966.  Petty Officer Ingram accompanied the point platoon as it aggressively dispatched an outpost of an NVA battalion.  The momentum of the attack rolled off a ridge line down a tree covered slope to a small paddy and a village beyond.  Suddenly, the village tree line exploded with an intense hail of automatic rifle fire from approximately 100 North Vietnamese regulars.  In mere moments, the platoon ranks were decimated.  Oblivious to the danger, Petty Officer Ingram crawled across the bullet spattered terrain to reach a downed Marine.  As he administered aid, a bullet went through the palm of his hand.  Calls for "CORPSMAN" echoed across the ridge.  Bleeding, he edged across the fire swept landscape, collecting ammunition from the dead and administering aid to the wounded.  Receiving two more wounds before realizing the third wound was life-threatening, he looked for a way off the face of the ridge, but again he heard the call for corpsman and again, he resolutely answered.  Though severely wounded three times, he rendered aid to those incapable until he finally reached the right flank of the platoon.  While dressing the head wound of another corpsman, he sustained his fourth bullet wound.  From sixteen hundred hours until just prior to sunset, Petty Officer Ingram pushed, pulled, cajoled, and doctored his Marines.  Enduring the pain from his many wounds and disregarding the probability of his demise, Petty Officer Ingram's intrepid actions saved many lives that day.  By his indomitable fighting spirit, daring initiative, and unfaltering dedications to duty, Petty Officer Ingram reflected great credit upon himself and upheld the highest traditions of the United States Naval Service.