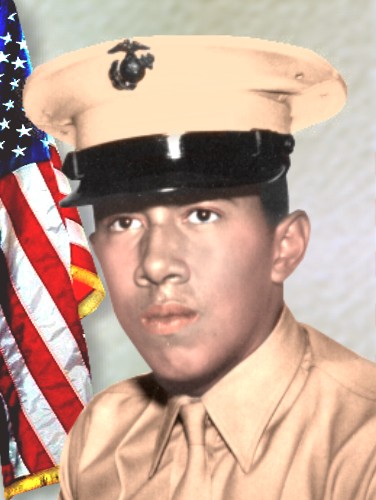 Miguel Keith was born on June 2, 1951, at San Antonio, Texas.  He entered military service with the Marine Corps on January 21, 1969, at Omaha, Nebraska.  Following recruit training at MCRD San Diego, he was assigned to the Third Marine Amphibious Force operating in Vietnam.  Here on April 1, 1970, he was promoted to the rank of Lance Corporal.  In the early morning of May 8, 1970, he was seriously wounded during a ground attack by a large enemy force.  In spite of his wounds he continued his vigorous assault against the enemy soldiers.  He succeeded in killing a number of the enemy but was finally mortally wounded.  LCPL Keith’s heroic efforts reportedly contributed to the success of his platoon in routing the enemy force and for his actions that day he was awarded the Medal of Honor.

The President of the United States in the name of The Congress takes pride in presenting the MEDAL OF HONOR posthumously to Lance Corporal Miguel Keith, United States Marine Corps, for service as set forth in the following  citation:  For conspicuous gallantry and intrepidity at the risk of his life above and beyond the call of duty while serving as a machine gunner with Combined Action Platoon 1-3-2, Third Marine Amphibious Force, operating in Quang Ngai Province, Republic of Vietnam.  During the early morning of 8 May 1970, Lance Corporal Keith was seriously wounded when his platoon was subjected to a heavy ground attack by a greatly outnumbering enemy force.  Despite his painful wounds he ran across the fire-swept terrain to check the security of vital defensive positions and then, while completely exposed to view, proceeded to deliver a hail of devastating machine gun fire against the enemy.  Determined to stop five of the enemy approaching the command post, he rushed forward, firing as he advanced.  He succeeded in disposing of three of the attackers and in dispersing the remaining two. At this point, a grenade detonated near Lance Corporal Keith, knocking him to the ground and inflicting further severe wounds.  Fighting pain and weakness from loss of blood, he again braved the concentrated hostile fire to charge an estimated twenty-five enemy soldiers who were massing to attack.  The vigor of his assault and his well-placed fire eliminated four of the enemy while the remainder fled for cover.  During this valiant effort he was mortally wounded by an enemy soldier.  By his courageous and inspiring performance in the face of almost overwhelming odds, Lance Corporal Keith contributed in large measure to the success of his platoon in routing a numerically superior enemy force, and upheld the finest traditions of the Marine Corps and of the United States Naval Service.

LCPL Keith is buried in the Forest Lawn Cemetery at Omaha, Nebraska, where his grave marker carries the inscription:  LCPL – US MARINE CORPS – VIETNAM – MEDAL OF HONOR – PURPLE HEART