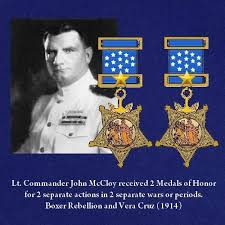 John McCloy (January 3, 1876 – May 24, 1945) was a sailor in the United States Navy who is one of only 19 individuals to receive the Medal of Honor twice. He received his first Medal of Honor for action in the Boxer Rebellion in June 1900. His second such award came in 1915 for action in Vera Cruz, Mexico in April 1914.

John McCloy enlisted in the United States Navy on March 7, 1898. He was warranted as a boatswain on July 30, 1903 and commissioned ensign on July 1, 1917. He received his first Medal of Honor "for distinguished conduct in the presence of the enemy in battles of the 13th, 20th, 21st, and 22nd of June 1900, while with the relief expedition of the Allied Forces in China." His second Medal of Honor was awarded to him “for distinguished conduct in battle and extraordinary heroism; engagement of Vera Cruz, April 22, 1914.”

Immediately after World War I, he commanded minesweeper USS Curlew (AM-8) clearing the mines of the North Sea mine barrage. For this work he was decorated with the Navy Cross. He retired from active duty as a lieutenant on October 15, 1928, and was promoted in retirement to lieutenant commander on February 23, 1942.

McCloy was a companion of the Naval Order of the United States and was active in both the Veterans of Foreign Wars and the American Legion. He was a founding member of American Legion Post No. 1 in Leonia, New Jersey, the first American Legion post in the state.

McCloy died of an apparent heart attack on May 25, 1945, in his home in Leonia,[1] and was buried in Arlington National Cemetery.[2]

In action with the relief expedition of the Allied forces in China, 13, 20, 21, and 22 June 1900. During this period and in the presence of the enemy, Coxswain McCloy distinguished himself by meritorious conduct.[3]

On 21 April 1914, at the United States occupation of Veracruz, under orders from Captain William R. Rush, three steam launches led by McCloy sailed from Pier 4 along the waterfront; passing the Fiscal Warf, they veered inshore, bearing towards the Naval Academy, fired a volley to the Academy from their small one-inch guns at their bows, and hastily returned, under heavy fire. Having thus revealed their positions, the Academy's guns were put out of commission by the shooting accuracy of the 3-inch guns from theUSS Prairie.[4]

For heroism in leading 3 picket launches along Vera Cruz sea front, drawing Mexican fire and enabling cruisers to save our men on shore, April 22 (sic), 1914. Though wounded, he gallantly remained at his post.[5][6]

For distinguished conduct in battle and extraordinary heroism, engagement of Vera Cruz, April 22 (sic: April 21 and 22), 1914:

On April 21, Chief Boatswain McCloy was in charge of three picket boats unloading men and supplies at a pier when his detachment came under fire from the nearby Mexican Naval Academy. To expose enemy positions, he took his boat [sic: three boats] away from the pier and directed fire at the building. His action drew retaliatory fire that allowed cruisers to locate and shell sniper positions, thus protecting the men on shore. McCloy was shot in the thigh but remained at his post for 48 hours (sic)[7] until the brigade surgeon sent him to a hospital ship. His medal citation credited him with “distinguished conduct in battle and extraordinary heroism.”.[8]

The USPS issued a series of stamps, Distinguished Sailors, to their 2010 stamp collection with McCloy as one of the four famous American sailors of the 20th Century.[10]