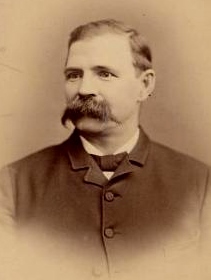 William Henry McKnight was born on May 3, 1842, in Ulster County, New York.  During the Civil War he served in the Union Navy as a Coxswain abourd the USS VARUNA where he was a gun captain.  The ship was reportedly outfitted with powerful 8-inch guns and was assigned as a gunboat to the Union blockage of the waterways of the Confederacy.  On April 24, 1862, VARUNA was with the squadron during Admiral Farragut’s daring nighttime dash past Confederate forces guarding the Mississippi River below New Orleans.  VARUNA was engaged in furious fire by Forts Jackson and St. Philip as well as by Confederate ships including the CSS MORGAN.  During the action at extremely close range, MORGAN twice rammed VARUNA which was so badly damaged that she was forced to beach and was finally sunk.  During the engagement Coxswain McKnight reportedly remained steadfast at his gun throughout the thickest of the fight even though numerous men around him were killed and was instrumental inflicting serious damage on the enemy.  For his conduct during this event, Coxswain McKnight was awarded the Medal of Honor.

“Captain of a gun on board the USS VARUNA during the attacks on Forts Jackson and St. Philip and in action against the rebel ship CSS GOVERNOR MOORE, 24 April 1862.  During this action at extremely close range, while his ship was under furious fire and was twice rammed by the rebel ship MORGAN, McKnight remained steadfast at his gun throughout the thickest of the fight and was instrumental in inflicting damage on the enemy until the VARUNA, so badly damaged that she was forced to beach, was finally sunk.”

Following the Civil Way, McKnight took up residence in Brooklyn, New York, where he worked as a ship wright.  He died on November 4, 1914, and is buried at Green-Wood Cemetery in Brooklyn.