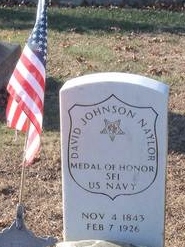 David Johnson Naylor was born on November 4, 1843, in Thompsonville, New York, and served in the Union Navy during the Civil War as a Landsman aboard USS ONEIDA, a screw sloop-of-war.  On August 5, 1864, during the Battle of Mobile Bay, he was a powder boy where his assignment was to pass shot and gun powder to the crew of a 30-pounder Parrott rifle.  During the action he was bringing a box of powder to the gun when it was shot from his hands and fell overboard into a small boat of the USS GALENA which was under the bow.  Without hesitation Naylor jumped overboard to recover the box, and returned to his station with the powder and continued to carry out his courageous actions throughout the engagement which resulted in the capture of the rebel ram CSS TENNESSEE and the damaging of Fort Morgan.

In 1861 an Act of Congress established the Medal of Honor to “promote efficiency in the Navy” to recognize men who distinguished themselves by their gallantry in action or “other seaman like qualities.”  President Abraham Lincoln signed the act into law on December 21, 1861, and only enlisted men were eligible for the award until 1915.  In recognition of his “gallant service” during the Battle of Mobile Bay, Landsman Naylor was awarded the Medal of Honor.  Naylor lived until February 7, 1926, and has been buried at River Bend Cemetery in Westerly, Rhode Island, where his tombstone contains an engraved Medal of Honor star and the inscription “Medal of Honor.”

Served on board the USS ONEIDA in the engagement at Mobile Bay, 5 August 1864.  Acting as powder boy at the 30-pounder Parrott rifle, Naylor had his passing box shot from his hands and knocked overboard where it fell in one of the GALENA’s boats which was under the bow.  Jumping overboard, Naylor recovered his box, returned to his station and continued to carry out his courageous actions throughout the engagement which resulted in the capture of the rebel ram CSS TENNESSEE and the damaging of Fort Morgan.