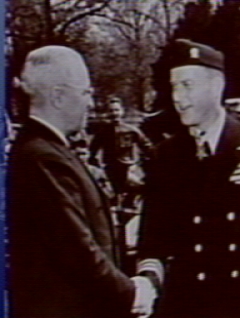 RADM Richard Hetherington "Dick" O'Kane USN Ret. graduated the Naval Academy in May 1934 and went to sea on USS Chester CA-27, then USS Pruitt DD-347. In 1938 he completed Submarine Training at New London and started his long connection with submarine service on the USS Argonaut SM-1. His next assignment was as Executive Office, USS Wahoo SS-238. The Wahoo completed five combat patrols during his assignment that ended in 1943.

Detached, he was ordered as Prospective Commanding Officer of a submarine so new that it was under construction when the orders were cut. After commissioning, October 1943, he was Commanding Officer, USS Tang SS-306. In five War Patrols the Tang sank 31 ships, one of the very top Pacific Campaign records for submarine achievement. One of his favorite tactics of attack was to take the Tang into an enemy convoy and attack ships ahead and behind in the heart of the convoy while avoiding escorting combat ships. He excelled at combat aircraft lifeguard duties to recover aviators. Off Truk Island Tang rescued 22 airmen (and one Japanese airman) in one mission, earning a Presidential Unit Citation; one of two earned during his command of the Tang.

In the Formosa Sea O'Kane launched a spread of three torpedoes and the third circled back and sunk the Tang. O'Kane and eight of his crew survived the sinking but only five, including O'Kane survived being exposed to the cold water and were taken prisoner by the Japanese. O'Kane spent the remainder of the war at the Japanese  Prisoner of War Camp, Omori Japan. He was later a witness at the Japanese War Crimes Trials.

He returned to active duty as CO, USS Pelias AS-14 with PACRESFLT, then as XO, USS Nereus AS-17. His next assignment was as COMSUBDIV 32, then as a student, Armed Forces Staff College, followed by Officer in Charge, Sub School, New London, and then back to sea as CO, USS Sperry AS-12. He completed his career as a student, Naval War College and then duty in Washington D.C., retiring as a Rear Admiral in 1957.

The Wardroom of the oldest active attack submarine in the Pacific Fleet carries a cribbage board presented to RADM O’Kane by the commissioning crew of the second USS TANG (SS-563). When decommissioned, the board transfers to the next oldest attack boat in the Pacific.

Rear Admiral O'Kane and his wife are buried at Arlington National Cemetery.