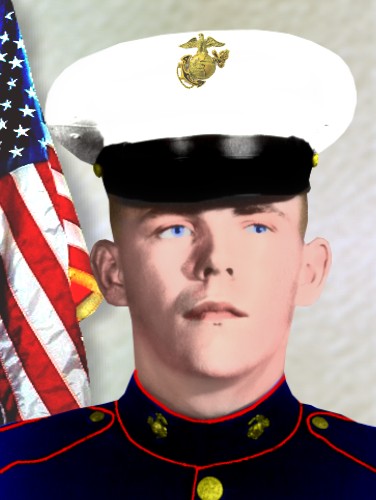 Jimmy Wayne Phipps was posthumously awarded the Medal of Honor for his heroic actions on May 27, 1969, during the Vietnam War.  He was born on November 1, 1950, in Santa Monica, California, and left high school to enlist in the Marine Corps on January 7, 1968.  Following recruit training at MCRD San Diego and at MCB Camp Lejeune, he was a student with the Marine Aviation Detachment, Naval Air Technical Training Command, Memphis, following which he underwent additional training at the Marine Corps Engineer Schools at Camp Lejeune.  In December 1968 he was transferred to the Republic of Vietnam where he served as a combat engineer with Company B, 1st Engineer Battalion, 1st Marine Division.  He was initially attached to Company C, 1st Battalion, 5th Marines (C/1/5), as its combat engineer.  He was then detached and returned to Company B, but in late May volunteered to return to the field with C/1/5.  While participating in combat in what was referred to as the “Arizona Territory” located in the vicinity of An Hoa on May 27, 1969, he was mortally wounded during the combat action for which he was awarded the Medal of Honor.  He is buried in Woodlawn Cemetery, Santa Monica, California, where his grave marker carries the inscription: MEDAL OF HONOR – PFC – USMC CORPS – VIETNAM – PURPLE HEART

The President of the United States takes pride in presenting the Medal of Honor posthumously to Private First Class Jimmy W. Phipps, United States Marine Corps, for conspicuous gallantry and intrepidity at the risk of his life above and beyond the call of duty while serving as a Combat Engineer with Company B, First Engineer Battalion, First Marine Division, in connection with combat operations against the enemy in the Republic of Vietnam.  On 27 May 1969, Private First Class Phipps was a member of a two-man combat engineer demolition team assigned to locate and destroy enemy artillery ordnance and concealed firing devices.  After he had expended all of his explosives and blasting caps, Private First Class Phipps discovered a 175mm high explosive artillery round in a rice paddy.  Suspecting that the enemy had attached the artillery round to a secondary explosive device, he warned other Marines in the area to move to covered positions and prepared to destroy the round with a hand grenade.  As he was attaching the hand grenade to a stake beside the artillery round, the fuse of the enemy's secondary explosive device ignited.  Realizing that his assistant and the platoon commander were both with a few meters of him and that the imminent explosion could kill all three men, Private First Class Phipps grasped the hand grenade to his chest and dived forward to cover the enemy's explosive and the artillery round with his body, thereby shielding his companions from the detonation while absorbing the full and tremendous impact with his own body.  Private First Class Phipp's indomitable courage, inspiring initiative and selfless devotion to duty saved the lives of two Marines and upheld the highest traditions of the Marine Corps and the United States Naval Service.  He gallantly gave his life for his country