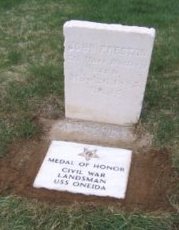 John Preston was born in 1841 in Ireland.  He joined the U.S. Navy in Boston in February 1862 and served during the Civil War as a Landsman aboard the USS ONEIDA, a screw sloop-of-war.  ONEIDA was commissioned on February 28, 1862, and Preston may have been aboard the ship during his entire Union Navy enlistment.  In April 1862 ONEIDA participated in attacks on Forts Jackson and St. Philip below New Orleans, Louisiana, and in an engagement drove off a Confederate ram after which she destroyed CSS GOVERNOR MOORE.  Several days later ONEIDA destroyed obstructions in the Mississippi River above Carroliton, Mississippi.  In August 1862 she sank the steamer LEWIS WHITMAN which was loaded with Confederate troops.  From October 15, 1863, to August 23, 1864, ONEIDA served in blockade operations off Mobile where on August 5, 1864, she participated in the Battle of Mobile Bay and the capture of CSS TENNESSEE.  During this engagement Landsman Preston was severely wounded and on December 31, 1864, he was awarded the Medal of Honor for his actions.  Due to his injuries he was discharged for disability in October 1864 as the result of his wounds.  He later died on May 26, 1885, and is buried at Togus National Cemetery in Togus, Maine.

Served on board the U.S.S. ONEIDA in the engagement at Mobile Bay, 5 August 1864.  Severely wounded, Preston remained at his gun throughout the engagement which resulted in the capture of the rebel ram TENNESSEE and the damaging of Fort Morgan, carrying on until obliged to go to the surgeon to whom he reported himself as "only slightly injured."  He then assisted in taking care of the wounded below and wanted to be allowed to return to his battle station on deck.  Upon close examination it was found that he was wounded quite severely in both eyes.