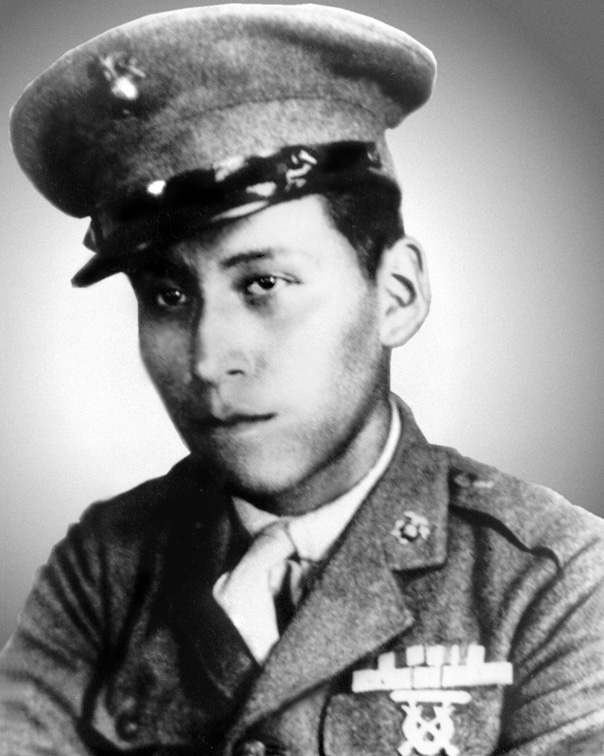 Mitchell Red Cloud Jr. was a Ho-Chunk (Winnebago) Native American born on July 2, 1925, in Hatfield, Wisconsin.  With his father’s permission he dropped out of high school and enlisted in the Marine Corps on August 11, 1941.  His Ho-Chunk lifestyle, his hunting skills and his great physical shape helped him excel as a Marine and gave him easy access into the 2nd Marine Raider Battalion, known as Carlson’s Raiders.  In 1942 the Raiders participated in the Battle of Guadalcanal.  Like many of his comrades, PFC Red Cloud developed a bad case of malaria, jaundice, and a host of other tropical diseases.  He reportedly lost 75 pounds before being ordered home for recovery.  After his recovery he declined a medical discharge, and then served as a member of A Company, 29th Marines, 6th Marine Division, during the Battle of Okinawa.  Here, on May 17, 1945, the war ended for Red Cloud with a Purple Heart when he took a bullet in his left shoulder.  He was reportedly discharged from the Marine Corps during 1946 with the rate of Sergeant.

In 1948, Red Cloud reentered military service by enlisting in the U.S. Army.  When the Korean War began, Red Cloud held the rate of Corporal and was sent to Korea in July 1950 with E Company, 2nd Battalion, 19th Infantry Regiment, 24th Infantry Division.  Red Cloud, now 25, was older than many of the men serving with him and as a decorated veteran, officers and enlisted men alike looked up to him.  His company was among the American troops who fought the first battles of the war, being pushed back during the Battle of Taejon and the Battle of Pusan Perimeter.  The 19th Infantry was also part of the Eighth United States Army advance into North Korea.

On the night of November 5, 1950, Red Cloud was manning a forward observation post at a point immediately in front of E Company when at about 3:20 a.m., the Chinese charged from a brush-covered area less than 100 feet from him.  He immediately sounded the alarm, and grabbing his Browning Automatic Rifle, Red Cloud emptied magazine after magazine into the charging Chinese troops at point-blank range.  His accurate and intense fire checked the assault and gained time for the company to consolidate its defense.  Although reportedly shot twice in the chest, he refused medical aid and continued his ferocious attack until he was shot again.  After falling to the ground, he wrapped his arm around a tree and continued his deadly fire again, until he was fatally wounded.  When his comrades retrieved his body the next morning, they found he had been shot as many as eight times before dying and a string of dead Chinese soldiers lay in front of him.  Red Cloud was credited with alerting his company to the ambush and saving them from being overrun.  For his actions, Corporal Red Cloud was posthumously awarded the Medal of Honor.

CPL Red Cloud was first buried at a U.N. cemetery in Korea but in 1955 his remains were returned for burial, in accordance with the ancestral custom of his people, in the Decorah Cemetery at Winnebago Mission in Wisconsin.  In recognition of CPL Red Cloud’s valor his name was given to the present-day Camp Red Cloud, in Uijeongbu, South Korea, now headquarters of the 2nd Infantry Division, U.S. Army.  Additionally, in 1999 the Navy named in his honor a newly commissioned Roll-on/Roll-off Cargo Ship, the USNS RED CLOUD (T-AKR-313).  His daughter, Annita Red Cloud, christened the ship at San Diego, California.

Corporal Red Cloud, Company E, distinguished himself by conspicuous gallantry and intrepidity above and beyond the call of duty in action against the enemy.  From his position on the point of a ridge immediately in front of the company command post he was the first to detect the approach of the Chinese Communist forces and give the alarm as the enemy charged from a brush-covered area less than 100 feet from him.  Springing up he delivered devastating pointblank automatic rifle fire into the advancing enemy.  His accurate and intense fire checked this assault and gained time for the company to consolidate its defense.  With utter fearlessness he maintained his firing position until severely wounded by enemy fire.  Refusing assistance, he pulled himself to his feet and wrapping his arm around a tree continued his deadly fire again, until he was fatally wounded.  This heroic act stopped the enemy from overrunning his company's position and gained time for reorganization and evacuation of the wounded.  CPL Red Cloud's dauntless courage and gallant self-sacrifice reflects the highest credit upon himself and upholds the esteemed traditions of the U.S. Army, for conspicuous gallantry and intrepidity in action at the risk of his life above and beyond the call of duty in Chong Hyon, Korea, 5 November 1950.