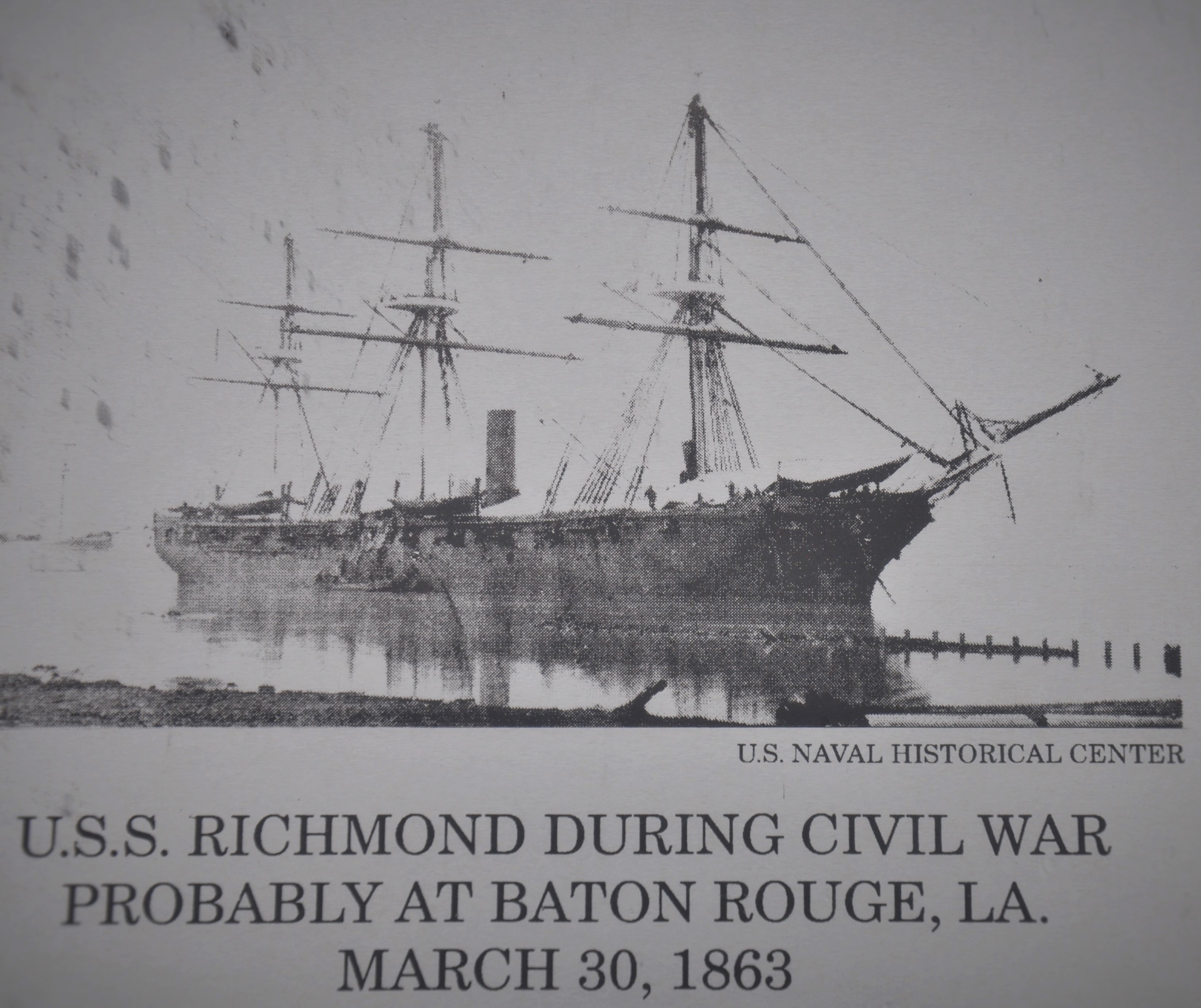 The USS RICHMOND was a 2604 ton wooden steam sloop of the Union Navy during the Civil War.  On March 14, 1863, she was in one of the fiercest naval engagements of the war when she was in a column of Union ships attempting to pass the Confederate fortifications at Port Hudson on the Mississippi River about 15 miles upriver from Baton Rouge.  As RICHMOND passed Port Hudson the ship was bombarded by shore batteries.  When almost past the batteries a 6-inch shot penetrated the ship’s wooden side and struck the starboard safety-valve chamber severing a steam line.  The space immediately filled with live steam and placed the ship in an extremely critical condition.  Acting courageously in the crisis and recognizing the ship might explode, a crewman took off his woolen shirt, tore it into four parts, and ran up on deck and soaked them with water.  He then gave three of them to three other crewmen, including First Class Fireman John Rush, and each of the four men then covered their faces with the soaked woolen and made their way into the steam filled space.  There, in spite of the scalding steam, they laboriously were able to douse the hot fires of the furnaces and saved the ship.  The combined effects of fire and steam compelled the four men to relieve one another at intervals as they were overcome by heat until their work was accomplished.  For their efforts in saving the ship and heroism, each of the four men was awarded the Model of Honor.

“The President of the United States in the name of The Congress takes pleasure in presenting the Medal of Honor to John Rush, First Class Fireman, U.S. Navy, serving on board the USS RICHMOND in the attack on Port Hudson, 14 March 1863.  Damaged by a 6-inch solid rifle shot which shattered the starboard safety valve chamber and also damaged the port safety valve, the fireroom of the RICHMOND immediately filled with steam to place it in an extremely critical condition.  Acting courageously in this crisis, Hickman persisted in penetrating the steam filled room in order to halt the hot fires of the furnaces and continued this action until the gravity of the situation had been lessened.”

Historical records contain little concerning Rush in addition to his Medal Of Honor certificate and information that he entered the Navy from Washington, D.C.