On 24 March 1952, Sarsi, commanded by Lt. W. M. Howard, departed San Diego and sailed west. On 18 April, she arrived at Sasebo, Japan. On the 20th, she took on ammunition; and, a week later, she continued on toward the embattled Korean peninsula. At the end of the month, she moored on the east side of Yodp, in the approaches to Wonsan harbor; and, as a unit of Task Group 92.2, the east coast Blockade and Escort Force, she performed towing, salvage, patrol, escort, buoy tender, and transportation duties. On 19 May, she returned to Sasebo, whence she completed one rescue mission and several towing assignments to southeastern Korean and Japanese ports. In late June, she operated off the west coast of Korea. In July, she again operated between southeastern Korea and Kyushu; and, on 19 August, she returned to the Wonsan area and resumed her varied duties there.

On the 20th, typhoon -Karen- hit the coast. For the next week, Sarsi towed various vessels; carried light cargo and personnel; relocated buoys and conducted nighttime, close-inshore anti-mining and anti-junk patrols. On the afternoon of the 27th, she refueled from Cimarron (AO-22); and, at 1847, moved north to patrol along the edge of the mineswept waters between Wonsan and Hungnam. At 2200, all unnecessary lights were extinguished. She reached Hungnam without incident; but, as she turned to return to Wonsan, a drifting mine, probably cut loose by the typhoon, exploded against her hull. Damage control efforts proved futile, and Sarsi sank in twenty minutes.

Four men were killed. The remainder, including four wounded, spent the night in, or clinging to, life rafts, life preservers, and the ship's whale boat. The whale boat, kept pointed out to sea with lines to the rafts, prevented drifting onto the enemy held shore. Rescue ships (destroyer, Boyd, and minesweepers, Zeal and Competent) arrived in the morning; and carried the survivors to friendly territory for medical treatment and reassignment. 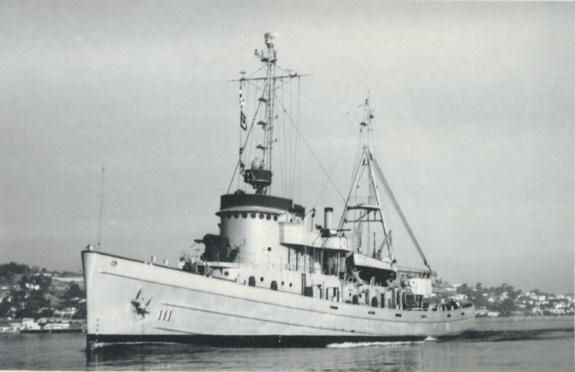