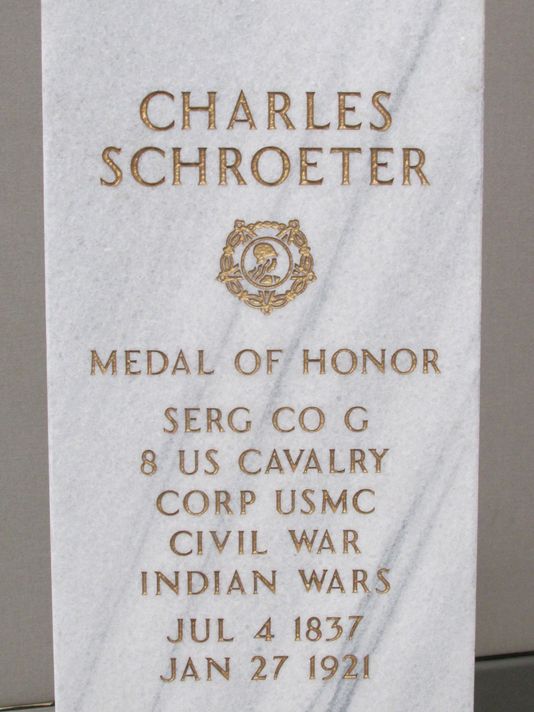 Charles Schroeter was reportedly born on July 4, 1837, in Lindberg, Germany.  He immigrated to America in 1860 aboard the German passenger ship BREMEN and disembarked in New Orleans where he found work and then moved upriver to St. Louis before the Civil War commenced.  On March 15, 1863, Schroeter was mustered into the 1st Volunteer Missouri Cavalry Regiment, and served in the Union Army until September 1, 1865, when he was mustered out as a private at Little Rock, Arkansas.  Following the Civil War, Schroeter worked briefly as a clerk until August 9, 1866 when he reenlisted in the U.S. Army at St. Louis and was assigned to the 8th Cavalry Regiment.  His unit fought Cochise and Chiricahua Apache during the American Indian Wars in a battle at Rocky Mesa in the Chiricahua Mountains of Arizona where on October 20, 1869, Schroeter earned the Medal of Honor for his gallant actions.

The President of the United States of America, in the name of Congress, takes pleasure in presenting the Medal of Honor to Private Charles Schroeter, United States Army, for gallantry in action on 20 October 1869, while serving with Company G, 8th U.S. Cavalry, in action at Chiricahua Mountains, Arizona Territory.

Although the details of PVT Schroeter’s actions on February 14, 1870, are sketchy, it has been recorded that he was a member of a U.S. Army detachment who tracked Apache Indians into the Chiricahua Mountains where the cavalrymen attacked.  The soldiers had to climb a steep-sided and narrow passage of loose slick rocks as they moved toward the top of the mesa.  Under deplorable conditions Schroeter and his fellow soldiers advanced upwards toward the hostile Indians.  As darkness fell, the cavalrymen were ordered to withdraw.  They did so in good order individually and in small groups down the dangerous slick slopes under enemy fire.  Some reportedly provided covering fire while others retreated a short distance, then the process would repeat.  Schroeter’s commanding officer was shot in the mouth during the withdrawal, destroying his lower left jaw.  The entire action cost a likely estimated 18 Apache lives and two confirmed Army soldiers dead.

Schroeter completed his tour of duty on August 9, 1871 in New Mexico but on October 7, 1871, he reenlisted in the Army at St. Louis.  He completed this tour of duty on October 7, 1876 in Dakota Territory.  Schroeter then traveled to Washington, D.C., where on November 2, 1876, he was sworn into the U.S. Marine Corps as a private.  In March 1877 he was assigned to a group of 26 Marines aboard the USS ALLIANCE, a screw boat, that joined the European Squadron protecting American lives and property in the Mediterranean.   ALLIANCE remained in Europe until December 1879 when she returned to Boston and then to Norfolk for repairs.  While at Norfolk, Schroeter became a hospital guard assigned to the USRS FRANKLIN, a barracks ship.  He was honorably discharged from the Marine Corps on November 4, 1881, having been promoted to Corporal in April 1881 while aboard FRANKLIN.

Schroeter returned to duty in the Army on November 14,1881, and remained in the Army until 1894 when discharged with the rank of Sergeant, having completed 30-years and 7-months of active service.  His discharge papers report he “sustained saber cuts on both arms and his left side, two saber cuts above his left ear, a bullet wound, and other wounds on the back of his neck.”  Schroeter next settled in Buffalo, New York, where he became a partner in a firm dealing in cigars, tobacco and confectionery.  In about 1918 Schroeter moved to San Diego, California, where he died on January 27, 1921.  In accordance with his wishes he was cremated.  His ashes were held in a communal crypt for many years as no relatives came forward to claim his ashes.  Finally a group of San Diego veterans learned of Schroeter’s story and after their extensive investigation the National Cemetery Administration agreed to place Schroeter’s ashes in the Miramar National Cemetery in San Diego where on July 9, 2015, a somber military ceremony took place as Sergeant Schroeter was reburied with full military honors and an Army General spoke saying, “Today we bring Sergeant Schroeter to a distinguished place to rest, a place he properly deserves.  From birth to death he lived a life of duty to honor his country.”