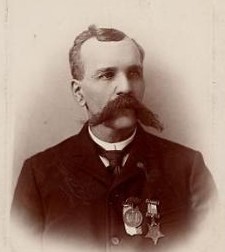 Lewis Capet Shepard was born on September 2, 1841, in Ashtabula, Ohio.  Historical records report he enlisted as a Private on April 27, 1861, in Company I, 19th Ohio Infantry, for a term of three months.  During that time, he participated in the Battle of Rich Mountain in Randolph County, West Virginia, the first major land battle of the Civil War.  According to Shepard’s muster card he spent three days on extra duty setting telegraph poles, mustering out of the unit on August 30, 1861.  Shephard reenlisted in the 11th Independent Battery, New York Light Artillery, on September 18, 1861, for a period of three years.  On August 26, 1862, he was captured with 19 other solders at the Second Battle of Bull Run.  During October and November 1862, he is listed with the 7th Detachment, 2nd Battalion, Paroled Prisoners, at Annapolis, Maryland.  He returned to the 11th Independent Battery, New York Light Artillery, in December 1862 and was promoted to Corporal on January 2, 1863.  Shepard’s unit was transferred to the Reserve Artillery and attached temporarily to Battery K, 1st New York Light Artillery, and with this unit he saw action at Chancellorsville, Gettysburg and the Battle of Mine Run.  Corporal Shepard was discharged on February 7, 1864, but the following day he reenlisted as a veteran volunteer in the 11th Independent Battery, New York Light Artillery.

Corporal Shepard was again discharged on April 23, 1864, after petitioning the Army for a transfer to the Navy under General Order 91 of 1864.  Enlisting in the U.S. Navy on April 25, 1864, at Baltimore, Maryland, as an Ordinary Seaman, he served aboard the USS Allegheny, USS Wabash, USS Commodore Perry and the USS Constellation.  During his service aboard the USS Wabash, Shepard participated in the landing party that assaulted Fort Fisher in Wilmington, North Carolina, on January 15, 1865.  He advanced gallantly through severe enemy fire, while armed only with a revolver and cutlass, which made it impossible to return the fire at that range.  Shepard succeeded in not only reaching the angle of the fort, but in being one of the few to enter it.  When the rest of the men to his rear were forced to retreat due to devastating fire, Shepard was forced to withdraw and seek the shelter of one of the mounds near the stockade.  Shepard then succeeded in regaining the safety of his ship.  After the fall of Fort Fisher, the Confederate army evacuated its remaining forts in the Cape Fear area, and Union forces soon overtook Wilmington.  Once Wilmington fell, the supply line of the Confederacy was severed, and the war soon ended.  On June 22, 1865, Shepard was awarded the Medal of Honor for his gallant actions at Fort Fisher.  However, due to a Navy clerical error, his citation was issued in the incorrect name of Louis Capet Shepard.

Shepard died on April 27, 1919 and is buried at Lakeview Cemetery in Port Clinton, Ohio, where his grave site is marked with two memorial plaques.  One displays the name LEWIS C. SHEPARD and lists only the dates of his birth and death.  The second plaque carries the name LOUIS C. SHEPARD and has the inscription:  MEDAL OF HONOR – ORDINARY SEAMAN – USS WABASH – CIVIL WAR.

Served as seaman on board the U.S.S. Wabash in the assault on Fort Fisher, 15 January 1865. Advancing gallantly through severe enemy fire while armed only with a revolver and cutlass which made it impossible to return the fire at that range, Shepard succeeded in reaching the angle of the fort and in going on, to be one of the few who entered the fort. When the rest of the body of men to his rear were forced to retreat under a devastating fire, he was forced to withdraw through lack of support and to seek the shelter of one of the mounds near the stockade from which point he succeeded in regaining the safety of his ship.