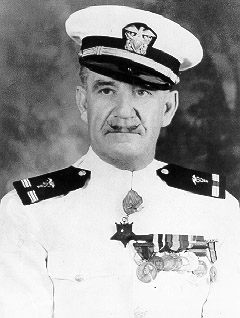 Robert Henry Stanley was born in Brooklyn, New York, on May 2, 1881, and at the age of sixteen enlisted in the Navy aboard the receiving ship USS VERMONT, anchored off New York City on March 28, 1898.  He served as a Landsman and participated in the Spanish-American War, which was declared only a month after his enlistment, and the Philippine-American War which began in 1899.  By June 13, 1900, he was serving as a Hospital Apprentice on the USS NEWARK in China.  The NEWARK had been sent to relieve Allied forces fighting in the Boxer Rebellion.  On June 13 and again from June 20 to June 22, in Beijing (then known to Americans as "Peking"), he volunteered to carry messages between the American and British legations despite heavy fire.  For these actions he was awarded the Medal of Honor a year later, on July 19, 1901.  The medal was presented to him aboard the armored cruiser USS BROOKLYN.  Nineteen years old at the time he earned the award, Stanley was the youngest Medal of Honor recipient of the Boxer Rebellion.  He was also the first member of the U.S. Navy medical community to receive the award.  Stanley was discharged from the Navy only three months after being awarded the Medal of Honor, on August 8, 1901, but later re-enlisted to serve in World War I.  He retired on February 1, 1939, having reached the warrant officer rank of Chief Pharmacist.  Three years later he died in Pensacola, Florida, at age 61 and was buried at Arlington National Cemetery.

For conspicuous gallantry and intrepidity at the risk of his life above and beyond the call of duty while serving in the presence of the enemy in volunteering and carrying messages under fire at Peking, China, on 12 July, 1900.  Hospital Apprentice Stanley's exceptional fortitude, inspiring initiative, and unrelenting devotion to duty reflected great credit upon himself and were in keeping with the highest traditions of the United States Naval Service.