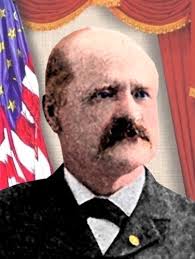 In 1861 an Act of Congress established the Medal of Honor to “promote efficiency in the Navy” to recognize men who distinguished themselves by their gallantry in action or “other seaman like qualities.”  President Abraham Lincoln signed the act into law on December 21, 1861, and only enlisted men were eligible for the award until 1915.  In recognition of his bravery and actions during the Battle of Stono River on January 30, 1863, Landsman Richard Stout was one of the first men in the Union Navy to be awarded the Medal of Honor.

Richard Stout was reportedly born during 1836 at Owego, New York.  On January 30, 1863, he was a Union Navy sailor serving on the USS ISAAC SMITH, a 453-ton steamer which was part of a Union fleet that was blockading the Carolina coast.  While operating in the Stono River in South Carolina, the ship was reconnoitering the area to determine the strength of Confederate forces.  Although she had a lookout atop her mast he failed to see camouflaged gun emplacements along the shore line which suddenly opened fire on ISAAC SMITH.  With fire coming from both side of the river the ship’s battery was inadequate to silence the hostile batteries and as she tried to escape down the river she was abreast of one of the batteries about 200 yards off and a shot disabled the engine which caused ISAAC SMITH to be grounded.

In a subsequent official report of the battle the commanding officer of ISAAC SMITH wrote, “I saw immediately that we were trapped and that my only course was to get the vessel below the batteries if possible and fight them with a more even chance of success.  For upward of a mile, on account of a bend in the river, we were obliged to receive the raking fire of between 20 and 30 guns without being able to reply.  As soon as our broadside could be brought to bear, we opened upon the enemy with shell and grape from 200 to 400 yards distant.  I had hopes of getting by without any very serious loss but a shot in our steam chimney effectually stopped the engine and we were left entirely at the mercy of the enemy.  With no hope of being able to silence enemy fire, I deemed it my duty to surrender.  Had it not been for the wounded men, with whom the berth deck was covered, I might have blown up or sunk the ship, but under the circumstances I had no alternative left me.  I need hardly say that the order to haul down the colors was the most difficult and heartrending one I ever gave.”

The report of the commanding officer particularly praised Landsman Richard Stout for his conduct during the battle in which eight were killed and 17 wounded.  Stout was one of those seriously wounded when he was struck and lost his right arm while returning the rebel fire.  In spite of his injuries he bravely continued carrying out his duties and ignored an order to seek medical aid when it appeared he would bleed to death.  The report read, “He managed with the assistance of a comrade to stop the rapid discharge of blood from his wound and with the crippled arm stayed at his post and fought until ISAAC SMITH surrendered.”  The ship thus became the only Union Navy ship to be captured during the Civil War.

“Serving on board the USS ISAAC SMITH; Stono River; 30 January 1863.  While reconnoitering on the Stono River on this date the USS ISAAC SMITH became trapped in a rebel ambush.  Fired on from two sides, she fought her guns until disabled.  Suffering heavy casualties and at the mercy of the enemy who was delivering a raking fire from every side, she struck her colors out of regard for the wounded aboard and all aboard were taken prisoners.  Carrying out his duties bravely through this action, Stout was severely wounded and lost his right arm while returning the rebel fire.”

Richard Stout died on August 6, 1896 at the age of 59 or 60 and he was buried in Evergreen Cemetery in Owego, New York, where his grave marker carries the inscription:  MEDAL OF HONOR – LANDSMAN – USS ISAAC SMITH – CIVIL WAR.