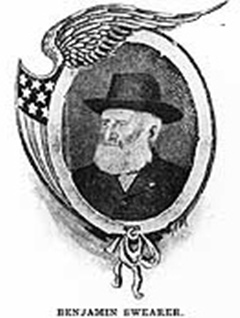 Benjamin Swearer was born on May 18, 1825, in Baltimore, Maryland, and served in the Union Navy during the Civil War.  On August 29, 1861, while serving in the crew of the steam sloop of war USS PAWNEE, he took part in the capture of Fort Clark at Hatteras Inlet, North Carolina.  In 1861 an Act of Congress established the Medal of Honor to “promote efficiency in the Navy” to recognize men who distinguished themselves by their gallantry in action or “other seaman like qualities.”  President Abraham Lincoln signed the act into law on December 21, 1861, and only enlisted men were eligible for the award until 1915.  In recognition of his “gallant service” during the capture of Fort Clark, Seaman Swearer was awarded the Medal of Honor on April 3, 1863, and reportedly was its first Navy recipient.  Swearer lived until November 2, 1902, and has been buried at Saint Peters Cemetery in St. Louis, Missouri, where his tombstone contains an engraved Medal of Honor star and the inscription “Medal of Honor.”

The President of the United States of America, in the name of Congress, takes pleasure in presenting the Medal of Honor to Seaman Benjamin Swearer, United States Navy, for extraordinary heroism in action while embarked in a surfboat from the USS PAWNEE during action against Fort Clark, off Baltimore Inlet, Maryland, on 29 August 1861. Taking part in a mission to land troops and to remain inshore and provide protection, Seaman Swearer rendered gallant service throughout the action and had the honor of being the first man to raise the flag on the captured fort.