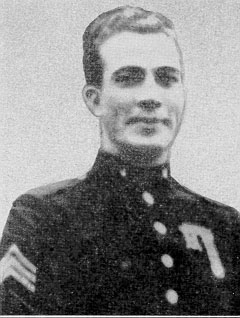 AWARDED MEDAL OF HONOR IN WWII

Among the first offensive ground combat operations of World War II was a raid by Marines on Makin Island on August 17-18, 1942.  The 221-man force was drawn from the Second Raider Battalion and was led by LTCOL Evans Carlson with CAPT James Roosevelt, son of President Roosevelt, as second in command.  The group embarked on August 8 from Pearl Harbor in two submarines with the aim of attacking the Japanese over 2000-miles away to destroy a Japanese installation, take prisoners, gain intelligence and divert attention from the Allied landings on Guadalcanal and Tulagi.  Upon arrival at the objective area on August 17 things began to go badly as the submarines surfaced to discover rain, stormy seas and high winds.  In spite of conditions the order was given to proceed with the landing but as the Marines boarded their rubber boats, powered by 6hp outboard motors, they had difficulty getting in their boats and soon, because of the high seas, many of the outboard motors failed.  On reaching the beach the high surf capsized a number of boats, equipment and weapons was lost and because of communications difficulties a group of 13-Raiders landed behind Japanese lines.  While the main Raider force waited for the order to advance an accidental burst of gun fire alerted the Japanese and eliminated any hope of surprise.  A short time later the Raiders advanced from the beach and were met with fierce resistance from Japanese snipers and machine guns which stalled the advance and inflicted casualties.  The Japanese then launched two terrifying banzai charges that were wiped out by the Raiders, killing most of the Japanese on the island, a fact unknown to the Raiders. In the early afternoon Japanese planes, including two large seaplanes carrying reinforcements arrived over the island but as the two seaplanes attempted to land in the lagoon they crashed because of heavy gunfire from the Raiders.  By early evening the fierce battle was over and the Raiders began their planned withdrawal.  However, the heavy surf and lack of working outboard motors prevented many from getting back to the waiting submarines.  Due to the conditions of the disorganized and chaotic withdrawal the Raiders were unable to evacuate the bodies of their fallen comrades so it has been reported that natives, who had willingly assisted the Marines during the day of battle, were paid to bury the fallen Marines in a common grave so that the Japanese would not mutilate their bodies.  On August 18 the withdrawal was completed and after the Raiders returned to Pearl Harbor it was determined that Marine casualties were 18 killed and 12 missing in action.  Only after the war would the Marine Corp discover that in the confusion of the withdrawal nine of the missing Marines had been left alive on the island and after their capture by the Japanese they were taken to Kwajalein Island where they were beheaded.

Knowing that Marines killed in the raid had been buried on Makin, unsuccessful attempts were made in 1948, August 1998 and May 1999 to locate their grave.  In late 1999 a forensic anthropologist and his team returned to Makin and got a huge break when an 82-year old native came forward claiming that as a boy of 16 he was present when the Marines were buried and knew the location.  With this information the grave site was finally located and the bodies of 19 Marines were recovered.  Their bodies were intact, some had helmets on their heads, dog tags around their necks and M-1 rifles resting on them.  The recovery team also found gas masks, ammunition and 55 live grenades.  As a full-dress Marine honor guard took the fallen Marines to a C-130 transport plane to return them home the elderly native who had led the discovery of the grave, with tears streaming down his face, sang the only English he knew, the words to “The Marines Hymn.”  After the 19 Marines were identified at the Defense Department’s Central Identification Laboratory in Hawaii, the remains of six were returned to their families for private burial ceremonies.  The remaining 13 were buried on August 17, 2001, exactly 59-years to the day that they died, at Arlington National Cemetery with full military honors at a ceremony attended by the Commandant and the Sergeant Major of the Marine Corps.  The Raiders fought together, died together, were buried together and were finally returned to the United States together.

SGT Clyde A. Thomason was the epitome of a Marine and lives in immortality with the Corps.  As a Raider he landed on Makin Island on August 17, 1942, and his actions that day earned him the distinction of being the first enlisted Marine of World War II to be awarded the Medal of Honor.  He was born in Atlanta, Georgia, on May 23, 1914, and following graduation from high school there, he traveled widely throughout the United States in a “jalopy” with companions.  In December 1934 he enlisted in the Marine Corps in Savannah, Georgia.  During his first enlistment he was assigned to the Marine Detachment aboard the USS AUGUSTA (CA-31), flagship of the Asiatic Fleet.  He was honorably discharged in 1939 upon expiration of his enlistment and was retained in the Fleet Marine Force Reserve.  Following the attack on Pearl Harbor he returned to active duty in January 1942, and when learning of the formation of the Raider Battalion he volunteered and was accepted.  Following extensive training in California his unit served in the Pacific where he wrote letters to friends stating that he wanted to be “where things are happening.”  It has been reported that he refused to accept assignments which would keep him away from action.  His commanders in the 2nd Raider Battalion thought so highly of SGT Thomason that he was selected to lead the advance element against the Japanese garrison on Makin Island.  It was during this action that he was killed during the initial battle and his gallantry in action earned him the Medal of Honor which was presented to his mother by Under-Secretary of the Navy, James Forrestal, at ceremonies in January 1943 in Washington, DC.  Following his death a War Bonds campaign in Georgia brought in sufficient funds to more than purchase a cruiser for the Navy, the USS ATLANTA (CL-104), and with the funds left over two destroyer escorts were also purchased, one the USS THOMASON (DE-203), named in honor of SGT Thomason.  The ship was commissioned on December 10, 1943, earning three battle stars during the remainder of World War II until decommissioned on May 22, 1946.  When the mass grave was uncovered on Makin Island in 1999, the remains of SGT Thomason were found and he was finally laid to rest at Arlington National Cemetery in 2001.  His younger brother, who followed his elder sibling into the Marines and served during World War II and Korea, spoke of SGT Thomason at Arlington saying, “He was a fine young man and we are quite gratified to finally be able to bring him home.”

For conspicuous gallantry and intrepidity at the risk of his life above and beyond the call of duty while a member of the Second Marine Raider Battalion in action against the Japanese held island of Makin on August 17-18, 1942.  Landing the advance element of the assault echelon, Sergeant Thomason disposed his men with keen judgment and discrimination and by his exemplary leadership and great personal valor, exhorted them to like fearless efforts.  On one occasion, he dauntlessly walked up to a house which concealed an enemy Japanese sniper, forced in the door and shot the man before he could resist.  Later in the action, while leading an assault on enemy position, he gallantly gave up his life in the service of his country.  His courage and loyal devotion to duty in the face of grave peril were in keeping with the finest traditions of the United States Naval Service.