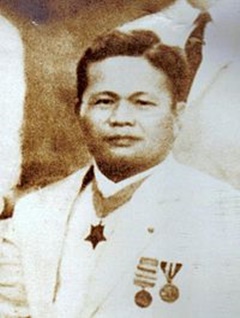 Telesforo Trinidad was born on November 25, 1890, in New Washington, Aklan Province, Panay, Philippines.  Trinidad enlisted in the U.S. Navy after the United States took possession of the Philippines in the wake of the Spanish-American War.  On 21 January 21, 1915, he was aboard the armored cruiser USS SAN DIEGO which was steaming in the Gulf of California as part of the naval patrol established to protect U.S. interests and citizens in Mexico.  The captain of SAN DIEGO decided to conduct a four-hour full-speed and endurance trial to determine if the cruiser could still maintain its officially rated flank speed.  At the end of the trials an obstructed tube of one of the ship's boilers gave way, creating an eventual chain reaction of other boilers.  The first explosion in the No. 2 boiler vented live steam into the fireroom and forced Trinidad from the fireroom as Ensign Robert W. Cary was closing the door.  Trinidad then realized that his crewmate, Fireman Second Class R. W. Daly, was still inside.  Risking his own life Trinidad re-entered the steam and smoke filled fireroom and carried Daly out to safety while Ensign Cary held the door open.  As Trinidad carried Daly through the No. 4 fireroom, an explosion of the No. 3 boiler hit Trinidad, burning him in the face.  After passing Daly to safety and in spite of his own injury, Trinidad then assisted in rescuing another injured crewman from the No. 3 fireroom.  In recognition of their bravery, the Navy on April 1, 1915, awarded both Ensign Cary and Trinidad the Medal of Honor.  Trinidad survived the ordeal and lived a long life, finally passing away at the age of 77 on May 8, 1968.  He was laid to rest at Imus Public Cemetery, Cavite, Calabarzon, Philippines.