Ship Designation:
DD-416
Date Lost:
Saturday, November 14, 1942
Naval Battle of Guadalcanal
About sunset on November 13, the day after the Naval Battle of Guadalcanal began, Walke sortied with fast battleships Washington (BB-66) and South Dakota (BB-57) in company with three other screening destroyers. On the 14th, the US Force reached a point 50 miles south-by-west from Guadalcanal where a Japanese surface force was encountered. ... Washington opened fire with her 16-inch guns; and, within seconds, South Dakota followed suit. Walke opened fire with her 5-inch guns maintaining a rapid barrage at what probably was the Japanese light cruiser Nagara. After checking fire, the lead destroyer opened up again at a Japanese destroyer 7,500 yards to starboard and, later, at gunflashes off her port side near Guadalcanal. Japanese shells straddled Walke twice, and then a Long Lance torpedo slammed into her starboard side at a point almost directly below mount 52. Almost simultaneously, a salvo of shells from one of the Japanese light cruisers hurtled down upon the hapless destroyer, a deluge of steel that struck home with devastating effect in the radio room, the foremast, below the gig davits, and in the vicinity of mount 53, on the after deckhouse. Meanwhile the torpedo had blown off the bow of the ship; and fire broke out as the forward 20-millimeter magazine blew up. ... With the battle damage situation hopeless, Walke's commanding officer, ordered the ship abandoned. As the destroyer sank rapidly by the bow, only two life rafts could be launched. The others had been damaged irreparably. After the crew made sure that the depth charges were set on safe, they went over the side just before the ship slipped swiftly under the surface. Although the destroyer's depth charges had apparently been set to safe, some depth charges went off, killing a number of swimming survivors and seriously injuring others. As the battle went on ahead of them, the able-bodied survivors placed their more seriously wounded comrades on rafts. ... Walke's survivors were, at one point, in two groups some clinging to the still floating bow section and others clustered around the two rafts that ship had been able to launch. During the harrowing night, they were twice illuminated by enemy warships but not molested, before the enemy switched off his searchlights and moved on. ... Meade rescued 151 men from WALKE, six of whom later died after they were brought ashore at Tulagi. 82 officers and men perished in the ship's fiery end off Savo Island. 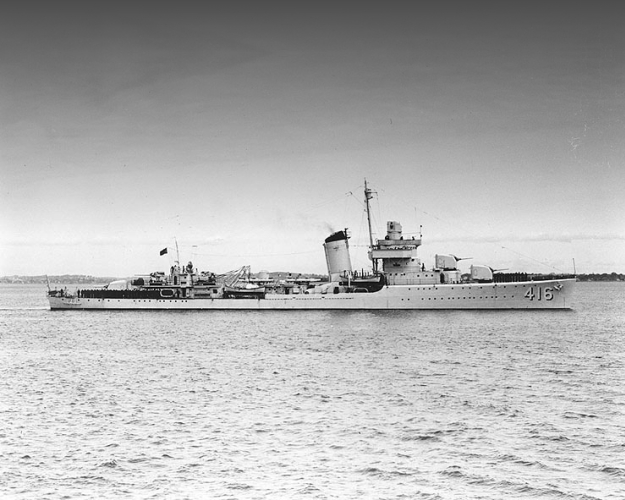