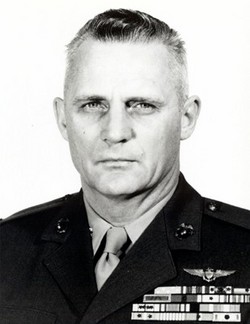 A veteran of both World War II and the Korean War, Kenneth Ambrose Walsh rose from a flying Private to the fourth-ranking Marine Corps Ace in World War II with a record of 21 enemy planes destroyed.  Walsh was born in Brooklyn, New York, on 24 November 1916.  He graduated from high school in 1933 and enlisted in the Marine Corps at the age of 17 on 15 December 1933.  Following recruit training at Parris Island, South Carolina, he spent two years as an aviation mechanic and radioman at Marine Corps Base, Quantico, Virginia.

In March 1936, Walsh was selected for flight training and was transferred to Pensacola, Florida. Here he won his wings as an enlisted Naval Aviation Pilot (NAP) in April 1937, and then spent four years in scout and observation flying.  During this time he served aboard three aircraft carriers and was promoted through the enlisted ranks to Master Technical Sergeant and then to Marine Gunner, equivalent to the rank of Warrant Officer.  In October 1942 he was commissioned Second Lieutenant.

When the Japanese attacked Pearl Harbor, Walsh was serving on the East Coast with Marine Fighting Squadron 121 but was transferred to Marine Fighting Squadron 124 in September 1942, for duty in Pacific. He arrived at Guadalcanal in February 1943, and was immediately committed to combat.  He claimed his first three Japanese planes on 1 April 1943 and two more in his next combat action on 13 May 1943, becoming the first Corsair fighter ace.  He was particularly active in aerial combat on August 15 and 30, 1943, while a division leader in his squadron.  Walsh repeatedly dived his plan into an enemy formation outnumbering his own division by six to one, and although his plane was hit numerous times, he shot down two Japanese dive bombers and one fighter.  Two weeks later he found himself even more greatly outnumbered and did it again.  After developing engine trouble, he landed his mechanically disable plane at Munda, quickly replaced it with another, and proceeded to rejoin his flight. When he unexpectedly encountered fifty Japanese Zeros, he unhesitatingly attacked, striking with relentless fury in his lone battle against a powerful force.  He destroyed four hostile fighters before cannon shellfire forced him to make a dead-stick landing off Vella Lavella, where he was later picked up.  For his valiant leadership and his daring skill as a flier, he was a source of confidence and inspiration to his fellow pilots and was awarded the Medal of Honor on 8 February 1944.  In April 1945 he was transferred to the Philippine Islands and served in that area and in the Okinawa campaign as Operations Officer for Marine Fighting Squadron 222.

During the Korean War, Walsh again went overseas and was awarded his fifteenth Air Medal “for outstanding performance of duty in aerial flight against the enemy in Korea.”  He retired from the Marine Corps on 1 February 1962 with the rank of Lieutenant Colonel.  He became a frequent participant in history seminars and often assisted researchers and historians interested in the Pacific War.  LTCOL Walsh died on 30 July 1998 from a heart attack, survived by his wife and a son.  He is buried at Arlington National Cemetery in Virginia.