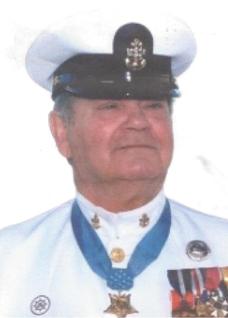 James Elliott Williams, a Native American Cherokee from South Carolina, entered the Navy in July 1947 and before retiring in April 1967 gained the distinction of becoming the most decorated enlisted man in Navy history.  When he retired from active service he was employed with the Wackenhut Corporation and in 1969 was appointed to the U.S. Marshal Service in South Carolina.  He also became an instructor at the Federal Law Enforcement Training Center, Glynco, Georgia, and also served at the U.S. Marshal Service Headquarters in Washington, D.C., until his retirement from Federal Government Service.

Williams died on October 13, 1999, and was buried at Florence National Cemetery in Florence, South Carolina.  The Master Chief Petty Officer of the Navy, speaking at the funeral said, “We will forever be grateful for the leadership and commitment he showed his sailors.  Petty Officer Williams was an amazing sailor.”  Following his death a retired Rear Admiral who commanded Williams in Vietnam remarked, “Willie did not seek awards.  He did not covet getting them.  We did not seek to make him a hero.  The circumstances of time and place, and the enemy’s presence did that.  I know through personal investigation of each incident that he never placed his crew nor his patrol boats in danger without first ensuring the risk was calculated and that surprise was on his side.  He always had the presence of mind not to endanger friendly villages.  He inspired us all, junior and senior alike.  It was my greatest honor to have served with the man who truly led us all with his example of unselfish devotion to duty.”  In December 2004 the USS JAMES E. WILLIAMS (DDG-95) was commissioned in his honor.

Boatswain's Mate 1st Class James Elliott Williams never intended to be a hero -- he just wanted to be a Sailor.  "When I was 16, I convinced the county clerk to alter my birth certificate so I could come into the Navy.  I thought there was nothing better than servin' my country and gettin' paid for it.”  But, Williams first experience at sea was less than glorious.  In fact, it was downright boring.  "The first ship I drew, I was the most disappointed man in the world.  I'd joined the Navy to see the world -- and doggonit, I wasn't moving.  I'd got orders to an LST that just sat around a buoy in San Diego harbor."  But, from that experience, Williams learned a valuable lesson about discipline and leadership.  "An old chief told me, 'Son, you got to learn to take orders, even if you disagree with them.  That's the first step to being a good sailor and a good leader.  If you can't take orders now, you certainly won't be respected when you give them later.'  Well, I got the message.  Learning discipline was the springboard that helped my Navy career.  From then on I had the sharpest damn knife and the shiniest shoes in the Navy.  That's what I was taught.  That's what I believed in, being a good Sailor.  The proudest day of my life had nothing to do with medals, ribbons, citations.  It was when they made me a patrol officer.  That position was held only by chiefs and officers.  It showed the trust the Navy had placed in me.  I always wanted the opportunity to show what I could do.  This Vietnam thing was it for me.  The Navy gave me the chance to do my job."

On his first day out, Williams didn't disappoint.  "October 31, 1966, was supposed to be a restful day in the steamy, heartland of the Viet Cong.  But it's one of those times I won't never forget, no matter how hard I try.  We were on a day patrol, kind of like the 'relax and recreation' patrol -- nothin' too heavy.  We were only gonna check a few boats coming down the Mekong River for contraband.  We were just moseying on down the river minding our own business when our forward gunner hollered, 'There's two fast-speed boats crossing ahead of us.'  We had learned if you saw one of these sampans, it was something.  It usually meant there was some high-ranking North Vietnamese officer on board -- and that meant trouble; as soon as the Viet Cong spotted us, they started firing."  The two boats split, one headed for the north bank, the other went east.  Williams and his crew broke off with the north-bound boat and sank it before it could reach the river's edge.  The thirty-six-year-old Williams, affectionately called Old Man by his crew of mostly 19 and 20 year olds, then turned for the second boat.  Just as he was about to open fire the sampan made a sharp turn into an eight-foot-wide canal in front of a rice paddy.  Williams and his crew of Patrol River Boat-105 couldn't follow.  "I looked at the map and saw that I could go to the right maybe for a third of a mile and come back to where he would have to come out.  We wanted to get them real bad. I went around that corner at max sped to cut him off -- and, lo and behold, I looked up and didn't see nothing but boats and people and more boats and more people."

Williams had unwittingly stumbled into a first staging area and there was no way out but straight ahead.  With bullets flying and guns blazing, Williams slammed the throttle down and pulled the wheel hard left, creating a large wake which slapped against the hull of the sampan and disrupted the enemy's aim.  Williams then took PBR-105 at full speed through the middle of the formation, causing mass confusion.  "Fire came from all directions. But their aim was off that day 'cause they was shootin' and hittin' more of each other than we was."  With some crafty boat handling, Williams zigzagged his way through the staging area while his crew returned the enemy's fire.  But, the cliché, "out of the frying pan and into the fire," was about to become much more real for Williams and his crew.  "We get through this area and I'm trying to high-tail it back.  We got around the next corner and by God! there's another staging area.  We had to just fight.  There was no way out.  I twisted, crisscrossed and turned that PBR.  I did whatever I could to get them off our backs."  The fight lasted for three and a half hours. When it was all over, Williams, with just two boats and 10 men, had sunk 65 enemy boats and eliminated 1,200 enemy troops.  "It's hard to believe the first day we were out, we got blasted to hell and back and nobody got killed."  For his heroic actions that day, Williams was awarded the Congressional Medal of Honor.  But he is quick to admonish anyone who wants to talk about his awards.  "You gotta stop and think about your shipmates.  That's what makes you a great person and a great leader - taking care of each other.  You've got to think -- team. It takes a team to win any battle, not an individual."  But on one particular day in 1966, this individual made the team unbeatable.

For conspicuous gallantry and intrepidity at the risk of his life above and beyond the call of duty.  BM1 Williams was serving as Boat Captain and Patrol Officer aboard River Patrol Boat (PBR) 105 accompanied by another patrol boat when the patrol was suddenly taken under fire by 2 enemy sampans.  BM1 Williams immediately ordered the fire returned, killing the crew of 1 enemy boat and causing the other sampan to take refuge in a nearby river inlet.  Pursuing the fleeing sampan, the U.S. patrol encountered a heavy volume of small-arms fire from enemy forces, at close range, occupying well-concealed positions along the river bank.  Maneuvering through this fire, the patrol confronted a numerically superior enemy force aboard 2 enemy junks and 8 sampans augmented by heavy automatic weapons fire from ashore.  In the savage battle that ensued, BM1 Williams, with utter disregard for his safety exposed himself to the withering hail of enemy fire to direct counter-fire and inspire the actions of his patrol.  Recognizing the over whelming strength of the enemy force, BM1 Williams deployed his patrol to await the arrival of armed helicopters.  In the course of his movement he discovered an even larger concentration of enemy boats.  Not waiting for the arrival of the armed helicopters, he displayed great initiative and boldly led the patrol through the intense enemy fire and damaged or destroyed 50 enemy sampans and 7 junks.  This phase of the action completed, and with the arrival of the armed helicopters, BM1 Williams directed the attack on the remaining enemy force.  Now virtually dark, and although BM1 Williams was aware that his boats would become even better targets, he ordered the patrol boats' search lights turned on to better illuminate the area and moved the patrol perilously close to shore to press the attack.  Despite a waning supply of ammunition the patrol successfully engaged the enemy ashore and completed the rout of the enemy force.  Under the leadership of BM1 Williams, who demonstrated unusual professional skill and indomitable courage throughout the 3 hour battle, the patrol accounted for the destruction or loss of 65 enemy boats and inflicted numerous casualties on the enemy personnel.  His extraordinary heroism and exemplary fighting spirit in the face of grave risks inspired the efforts of his men to defeat a larger enemy force, and are in keeping with the finest traditions of the U.S. Naval Service.

Legion of Merit (with “V” device)

Vietnam Cross of Gallantry (with gold star and palm)