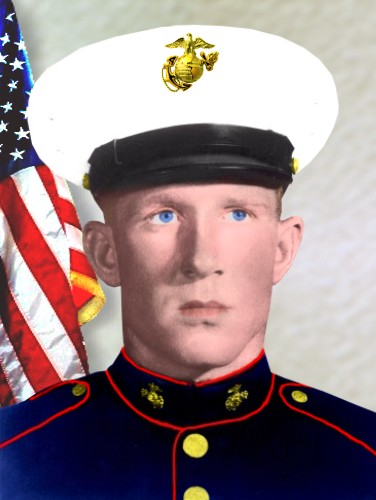 The President of the United States takes pride in presenting the Medal of Honor posthumously to Private First Class Alfred M. Wilson, United States Marine Corps, for conspicuous gallantry and intrepidity at the risk of his life above and beyond the call of duty while serving as a Rifleman with Company M, Third Battalion, Ninth Marines, Third Marine Division, in action against hostile forces in the Republic of Vietnam.  On March 3, 1969, while returning from a reconnaissance in force mission in the vicinity of Fire Support Base Cunningham in Quang Tri Province, the First Platoon of Company M came under intense automatic weapons fire and a grenade attack from a well-concealed North Vietnamese Army force pinning down the center of the column.  Rapidly assessing the situation, Private First Class Wilson, acting as Squad Leader, skillfully maneuvered his squad to form a base of fire and act as a blocking force while the point squad moved to outflank the enemy.  During the ensuing fire fight, both his machine gunner and assistant machine gunner were seriously wounded and unable to operate their weapon.  Realizing the importance of recovering the M-60 and maintaining a heavy volume of fire against the hostile force, Private First Class Wilson, with complete disregard for his own safety, followed by another Marine, fearlessly dashed across the fire-swept terrain to recover the weapon.  As they reached the machine gun, a North Vietnamese soldier threw a grenade at the Marine.  Reacting instantly, Private First Class Wilson fired a burst from his M-16 rifle killing the enemy soldier.  Observing the grenade fall between himself and the other Marine, Private First Class Wilson, fully realizing the inevitable result of his actions, shouted to his companion and unhesitatingly threw himself on the grenade, absorbing the full force of the explosion with his own body.  His heroic actions inspired his platoon members to maximum effort as they aggressively attacked and defeated the enemy.  Private First Class Wilson's indomitable courage, inspiring valor and selfless devotion to duty upheld the highest traditions of the Marine Corps and the United States Naval Service.  He gallantly gave his life for his country.