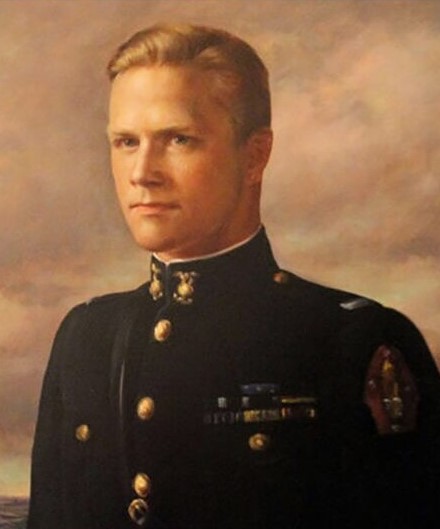 Excerpts from article published in San Diego Union-Tribune on 9/27/2015:

The recently identified remains of a Marine hailed for his bravery in battle are heading home 72 years after he was killed on a remote Pacific atoll during World War II.  First Lieutenant Alexander “Sandy” Bonnyman died at age 33 while leading Marines against entrenched Japanese forces during a three-day fight for the strategically important island of Tarawa in 1943.  He was posthumously awarded the Medal of Honor in 1947 but his remains weren’t found until earlier this year by a nonprofit organization called History Flight that has been searching for missing servicemen.  A bugler played taps and a color guard rendered honors for Bonnyman during a departure ceremony in Honolulu.  Bonnyman’s family plans to lay him to rest at the same Knoxville, Tennessee, cemetery where his parents were buried.  “I feel I’m carrying on that mission that they started in 1944,” Clay Bonnyman Evans, Bonnyman’s grandson, said of his great-grandparents.  “Here we are in 2015.  All those years later, it’s being done.  He’s going to be buried exactly where they wanted him.”

More than 990 U.S. Marines and 30 sailors died in the Battle of Tarawa.  Japanese machine gun fire killed scores of Marines when their boats got stuck on the reef at low tide during the U.S. amphibious assault.  Americans who made it to the beach faced brutal hand-to-hand combat.  Only 17 of the 3,500 Japanese troops survived.  Bonnyman led his Marines over a pier to the beach where they used flame-throwers and demolitions to destroy installations and attack a bombproof shelter that was protecting about 150 Japanese soldiers.  The Marines flushed out more than 100 of the occupants into the open, where they were shot down.  Bonnyman killed three attackers before he was mortally wounded.  The U.S. secured the island the day Bonnyman died.  The Department of Defense POW/MIA Accounting Agency announced it had identified Bonnyman using dental records and other evidence.

Rank and organization:  First Lieutenant, U. S. Marine Corps Reserves.  Born: 2 May 1910, Atlanta, GA. Accredited to:  New Mexico.  Citation:  For conspicuous gallantry and intrepidity  at the risk of his life above and beyond the call of duty as Executive Officer of the 2d Battalion Shore Party, 8th Marines, 2d Marine Division, during the assault against enemy  Japanese-held Tarawa in the Gilbert Islands,  20-22 November 1943.  Acting on his own initiative when assault troops were pinned down at the far end of Berio Pier by the overwhelming fire of Japanese shore batteries,  1st Lt. Bonnyman defied the blasting fury of the enemy  bombardment to organize and lead the besieged men over the long, open pier to the beach and then,  voluntarily obtaining  flame throwers and demolitions, organized his pioneer shore party into assault demolitionists  and directed the blowing of several hostile installations before the close of D-day.  Determined to effect an opening in the enemy’s strongly organized defense line the following day,  he voluntarily crawled approximately 40 yards forward of our lines and placed demolitions in the entrance of a large emplacement  as the initial move in his planned attack against the heavily garrisoned, bombproof installation which was stubbornly resisting despite the destruction early in the action of a large number of Japanese who had been inflicting heavy casualties on our forces and holding up our advance.  Withdrawing only to replenish his ammunition, he led his men in a renewed assault  fearlessly exposing himself to the merciless slash of hostile fire as he stormed the formidable bastion, directed the placement of demolition charges in both entrances and seized the top of the bombproof position, flushing more than 100 of the enemy who were instantly cut down, and effecting the annihilation of approximately 150 troops inside the emplacement.  Assailed by additional Japanese after he had gained his objective, he made a heroic stand on the edge of the structure, defending his strategic position with indomitable determination in the face of the desperate charge and killing 3 of the enemy before he fell, mortally  wounded.  By his dauntless fighting spirit, unrelenting aggressiveness and forceful leadership throughout 3 days of unremitting, violent battle, 1st Lt. Bonnyman had inspired his men to heroic effort, enabling them to beat off the counterattack and break the back of hostile resistance in that sector for an immediate gain of 400 yards with no further casualties to our forces in this zone.  He gallantly gave his life for his country.