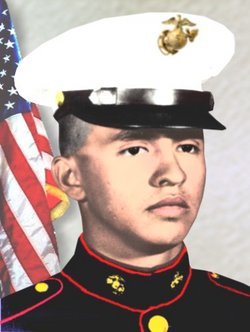 Emilio Albert DeLaGarza, Jr., who was posthumously awarded the Medal of Honor, was born on June 23, 1949, in East Chicago, Indiana.  After graduating from East Chicago Washington High School in 1968 he married Rosemary Rejon and they had one daughter.  He was employed by Inland Steel Company in East Chicago before enlisting in the Marine Corps on February 4, 1969, in Chicago.  After completion of recruit training at MCRD San Diego he was ordered to Camp Pendleton.  After promotion to Private First Class on July 1, 1969, he arrived in Vietnam on July 25, 1969 for duty as a machine gun team ammunition carrier with Company H, 2nd Battalion, 3rd Marines, 3rd Marine Division.  On September 29, 1969, he was reassigned to the 1st Marine Division and served with Headquarters and Service Company, 2nd Battalion, 1st Marines.  On February 1, 1970 he was promoted to Lance Corporal and joined Company E, 2nd Battalion, 1st Marines, 1st Marine Division.  On April 11, 1970, LCPL DeLaGarza was serving as a machine gunner on a squad night patrol approximately four miles south of Da Nang when he was mortally wounded while engaged with Viet Cong fighters.  For his selfless heroic actions which resulted in saving the lives of two fellow marines he was posthumously awarded the Medal of Honor.

The President of the United States in the name of The Congress takes pride in presenting the Medal of Honor posthumously to Lance Corporal Emilio A. DeLaGarza, Jr., United States Marine Corps, for service as set forth in the following CITATION:  For conspicuous gallantry and intrepidity at the risk of his life above and beyond the call of duty while serving as a machine gunner with Company E, Second Battalion, First Marines, First Marine Division, in the Republic of Vietnam on April 11, 1970.  Returning with his squad from a night ambush operation, Lance Corporal DeLaGarza joined his Platoon commander and another Marine in searching for two enemy soldiers who had been observed fleeing for cover toward a small pond.  Moments later he located one of the enemy soldiers hiding among the reeds and brush.  As the three Marines attempted to remove the resisting soldier from the pond, Lance Corporal DeLaGarza observed him pull the pin on a grenade.  Shouting a warning, Lance Corporal DeLaGarza placed himself between the other two Marines and the ensuing blast from the grenade, thereby saving the lives of his comrades at the sacrifice of his own.  By his prompt and decisive action, and his great personal valor in the face of almost certain death, Lance Corporal DeLaGarza upheld and further enhanced the finest traditions of the Marine Corps and the United States Naval Service.