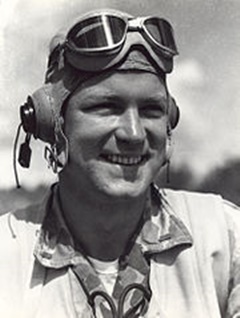 Bougainville was a tropical pesthole.  There, on November 1, 1943, in the early afternoon, five Corsairs of VMF-215, encountered a large formation of Japanese bombers and fighters that had come to strike the ships and troops cluttering up the shore line of beaches at Torokina.  Flying with VMF-215 was one of the most colorful Marine pilots of the war, Lieutenant Robert M. Hanson, son of Methodist missionaries from Massachusetts.  Hanson had been born in India in 1920 and had been a Marine flyer since February 1943.  In the battle of the afternoon of the Bougainville landings, Hanson singlehandedly attacked six Kates with such ferocity that several jettisoned their bombs before reaching Torokina.  Three others fell in flames under Hanson’s guns and two others were knocked down by other men of VMF-215.  But a rear gunner in one of the Kates shot down Hanson.

Setting his Corsair down on the water, Hanson broke out his dinghy and sat in it awaiting further developments.  For nearly six hours Hanson waited until he saw the destroyer USS SIGOURNEY on its way back to Vella Lavella to pick up more passengers for Torokina.  Alternately waving and paddling, Hanson set out for the SIGOURNEY cheering himself with the Cole Porter song “You’d Be So Nice to Come Home To.”  The American ship veered slightly from course, picked up the redoubtable Marine and continued on to Vella Lavella.

Upon returning to VMF-215 Hanson continued with his nonchalant spree of destruction.  In one period of seventeen days he shot down twenty enemy aircraft, which earned him the nickname of “Butcher Bob.”  Four of these victories were achieved on January 30, 1944, during an Avenger strike on Rabaul.  Hanson flew with the escort and during the battle over the great Japanese base, shot down four of the twenty-one Japanese planes destroyed during the mission.  This brought his total of Japanese planes destroyed up to twenty-five.

Three days later, on February 3, the day before Hanson’s twenty-fourth birthday and a week before he was scheduled to return to the United States, Hanson volunteered for a strafing mission in the Rabaul area, upon Cape Saint George, New Ireland.  On this point, across the channel from New Britain, stood a lighthouse which afforded the Japanese a fine lookout.  Though never actually destroyed, it was a bothersome, challenging target.  Hanson came in low over the cape and never came out of his run.  Apparently hit by antiaircraft guns, Hanson crashed into the sea ending one of the most meteoric fighter pilot careers in the Pacific.  Until he was killed it appeared that Hanson would equal or even surpass the number of victories.to become the ace with the highest score.  Following his death he was posthumously awarded the Medal of Honor.

For conspicuous gallantry and intrepidity at the risk of his life above and beyond the call of duty as a fighter pilot attached to Marine Fighting Squadron TWO FIFTEEN in action against Japanese forces at Bougainville Islands, November 1, 1943, and New Britain Island, January 24, 1944.  Undeterred by fierce opposition and fearless in the face of overwhelming odds, First Lieutenant Hanson fought the Japanese boldly and with daring aggressiveness.  On November 1, while flying cover for our landing operations at Empress Augusta Bay, he dauntlessly attacked six enemy torpedo bombers, forcing them to jettison their bombs and destroying one Japanese plane during the action.  Cut off from his division while deep in enemy territory during a high cover flight over Simpson Harbor on January 24, First Lieutenant Hanson waged a lone and gallant battle against hostile interceptors as they were orbiting to attack our bombers and, striking with devastating fury, brought down four Zeros and probably a fifth.  Handling his plane superbly in both pursuit and attack measures, he was a master of individual air combat, accounting for a total of 25 Japanese aircraft in this theater of war.  His great personal valor and invincible fighting spirit were in keeping with the highest traditions of the United States Naval Service.