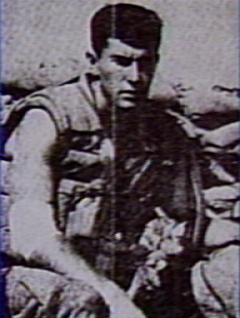 Awarded for actions during the Vietnam War

The President of the United States of America, in the name of Congress, takes pride in presenting the Medal of Honor (Posthumously) to Hospital Corpsman Third Class Wayne Maurice Caron (NSN: B-116083), United States Navy, for conspicuous gallantry and intrepidity at the risk of his life above and beyond the call of duty while serving as Platoon Corpsman with Company K, Third Battalion, Seventh Marines, THIRD Marine Division (Reinforced), Fleet Marine Force, during combat operations against enemy forces in Quang Nam Province, Republic of Vietnam, on 28 July 1968. While on a sweep through an open rice field Hospital Corpsman Third Class Caron's unit started receiving enemy small arms fire. Upon seeing two marine casualties fall, he immediately ran forward to render first aid, but found that they were dead. At this time, the platoon was taken under intense small-arms and automatic weapons fire, sustaining additional casualties. As he moved to the aid of his wounded comrades, Hospital Corpsman Third Class Caron was hit in the arm by enemy fire. Although knocked to the ground, he regained his feet and continued to the injured marines. He rendered medical assistance to the first marine he reached, who was grievously wounded, and undoubtedly was instrumental in saving the man's life. Hospital Corpsman Third Class Caron then ran toward the second wounded marine, but was again hit by enemy fire, this time in the leg. Nonetheless, he crawled the remaining distance and provided medical aid for this severely wounded man. Hospital Corpsman Third Class Caron started to make his way to yet another injured comrade, when he was again struck by enemy small-arms fire. Courageously and with unbelievable determination, Hospital Corpsman Third Class Caron continued his attempt to reach the third marine until he was killed by an enemy rocket round. His inspiring valor, steadfast determination and selfless dedication in the face of extreme danger, sustain and enhance the finest traditions of the U.S. Naval Service.